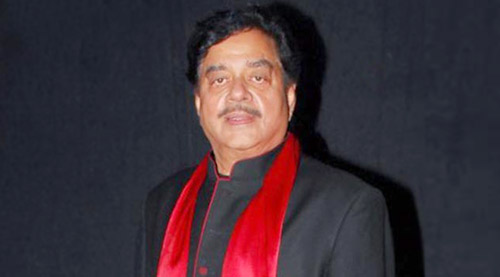 Like a lot of people in the film industry Shatrughan Sinha is surprised by Aamir Khan's public revelation that he has discussed the idea of leaving India with his wife due to the growing intolerance in the country.


"I am surprised. Aamir and Kiran Rao are a very nice gentle and amiable couple. Why did Aanir bring this up on a public forum? He must have his reasons. I wonder why he brought up a private conversation with his wife in public. Did he ask her permission?' wonders Shatruji.


However he feels too much is being made of the issue. "It wasn't as if Aamir said he's leaving. It was just a thought, albeit an improper thought. He should've not said it. But it's not such a huge issue that it should polarize the film industry the way it seems to have done."


Shatruji also slams political parties for raising a hue and cry. "They are jumping into the debate to make mileage which is wrong. Such sensitive issues cannot be used to make political mileage. We should try to understand why a man as intelligent sensible and successful as Aamir Khan said he felt insecure about his child in India and not slam him for speaking his mind. And imagine if a man who can afford the best security service says he fears for his child, what impact this would have on the defenseless common man."


Shatruji however, is one with those who have tweeted about Aamir's presence in the film PK which satirized the Hindu religion.


"What more proof do we need of how tolerant we are in this country? There may be sporadic incidents of violence. But that doesn't prove this country is unsafe for our children," says Shatrughan Sinha.