With many digital shows making their way, ZEE5 has launched yet another intriguing show, Poison. The story is a combination of revenge, love, greed and lust and brings together Arbaaz Khan, Riya Sen, Freddy Daruwala and Tanuj Virwani. 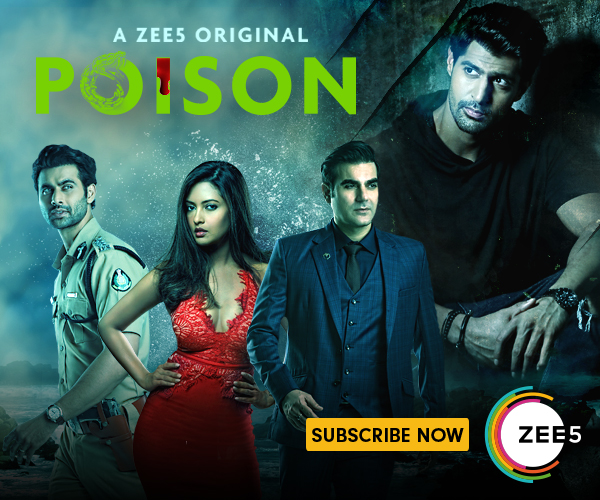 Here are the five reasons Poison is a must watch:

1. Arbaaz Khan returns as a baddie:
The actor plays the role of a don who runs a drug business in the state of Goa. He is on the hit list of the police commissioner. He has a layered personality and is not very forgiving in nature. He has a girlfriend, essayed by Riya Sen, who also his secretary and his close confidante.

2. Multilayered role of Tanuj Virwani:
The actor is a primary character on the show who has a charming persona but if one looks closely, there's a lot of sadness in his eyes. He is not much of a talker himself but has a tactful way of making others talk. He is technology savvy and there is always a sense of drive about him where he never loses focus of his real purpose. His character comes to Goa from a slightly shadowy background and buys a nightclub there and ingrates himself into the family of his neighbour ACP Vikram Singh.

3. Freddie Daruwala in uniform
Freddie Daruwala is playing an Asst. Commissioner of Police who has been posted in Goa for last 5 Years. He is a handsome man in his early forties. There is sense of raw power that exudes from him and his demeanour leaves no doubt about his integrity and honesty. Socially, his character has an easy-going persona but he is slightly reserved in his judgment of others. Having observed the dark side of human nature in close quarters, he does not trust anyone easily. Only male in a family of four, he does not interfere much in the business of women but is very protective of them

4. Revenge saga:
'Revenge is the only reason to live'- the tagline reads in the trailer. Poison is a show about a man seeking revenge against the people who did his loved ones wrong. He sets out to ruin their lives. Throughout his journey in the show, he realises that revenge can finish you internally - That it can turn your blood into poison.

5. Gritty yet action packed:
While the trailer is power packed with the star cast, the multi layered dark thriller has gritty storyline with many twists and turns. Each character has an interesting storyline which brings them all together in this action packed entertaining revenge saga.

Produced by Altus Media, directed by Jatin Wagle and written by Shiraz Ahmed, the ten-episode web series premiered on ZEE5 on April 19, 2019.

ZEE5 is making sure interesting stories are being told. To get more updates, download the ZEE5 app to keep up with latest updates.

The Kapil Sharma Show to celebrate…