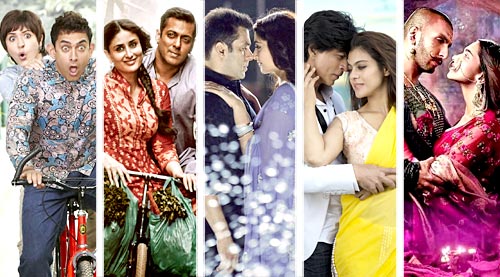 2015 is coming to a close and it is now time to begin looking at the prospects for the next year. The multi-crore question is - Will Rs. 300 crore become a trend for all superstar biggies and that would lead to the emergence of the Rs. 400 crore club?

Well, as things stand today, No!

As a matter of fact one can't bet that for many films till the end of 2016 at the least.

The business of films is growing for sure with PK and Bajrangi Bhaijaan making over Rs. 300 crore inside 8 months of each other. Then there is Prem Ratan Dhan Payo which is set to cross the Rs. 200 crore mark today. If not for the clash, both Dilwale and Bajirao Mastani could have comfortably crossed this mark solely on the basis of opening. Now it would be the content that would do the talking and with good luck, both could well cross this mark as well.

However, the hard fact is that the increase in footfalls is linear and not exponential. In simpler terms, it is not multiplying by such leaps and bounds that every other good film starts entering the Rs. 100 crore club, every biggie turns into a Rs. 200 crore outing and a major superstar film is bound to step into the Rs. 300 crore territory.

Is that a possibility? Yes, but only from 2017 onwards when more multiplexes mushroom across the country and there are added screens as well. Currently, the contribution of single screens is quite low, even though the footfalls are in comparison with the multiplexes. The revenue generated from B and C centers is low, even though people are watching films there for sure. However, since piracy is still high, there is a substantial population that is still content with watching a film for just 50 bucks, and that too with the entire family. This is a phenomenon prevalent not just in small towns but upper class audience in the cities.

This can be beaten only if there are more theaters screening films right at the doorstep. Once that happens, Rs. 400 crore for a film is not far away. For now, 2016 has quite a few major films lines up in the form of Shahrukh Khan's Fan and Raees, Salman Khan's Sultan and Aamir Khan's Dangal. Will any of these hit for that Rs. 400 crore mark? Well, one can't be too sure, unless these superstars begin to deliver Rs. 300 crore blockbusters in quick succession, regardless of the might (or lack) of the content!