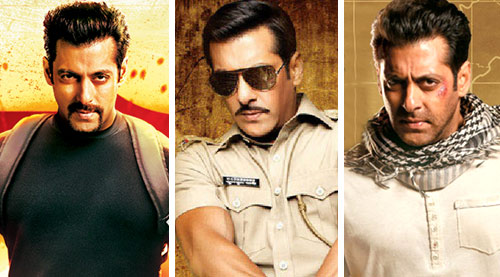 Yes, his acting has critics double-face-palming at every third shot, his action defies the laws of Physics, his dance looks like

Hulk being tickled, and his scripts have destroyed the reputation of Bollywood writers irreparably, yet, Salman Khan films make BIG money at the

one film a year (so he gets the undisputed attendance of his stardom-starved fans on that one Friday of the year), all Salman Khan does is just be

the unapologetic him (with all his girlfriend-abuse rumours, blackbuck and hit-and-run cases being all out there, in-your-face).

If Shah Rukh Khan were to be guilty of such cases, he would've been 'sent to Pakistan' while Aamir Khan's films would've been boycotted for life

So, WHY and HOW do Salman Khan movies make blockbusters in Bollywood?

1. Salman kicking the goons in their balls, gives Indians a kick

Secretly, Indian audience is NOT yet over the Trouble-my-girl-and-I-knock-your-face practice in films. All the more now when the masses (women,

especially) are exasperated reading about rapes every now and then, a nice-looking, macho (yet mostly a sitiya-baaz, roadside lover) Salman Khan

kicks the balls of goons in his films for his ladylove, the audience gets a strange rushing adrenalin satisfaction. (Again, especially the women, who

derive most satisfaction through Salman Khan, unsure if their own partners would EVER do the same for them)

As much as people deny it, they can't help but be just star struck of stars with fiery tantrums. Be it the news of turning up late for shoots, slapping

a fan or mocking another star. Again, Indians love the whole aura of a 'star' to the hilt. They expect a hero on screen to be a hero off screen. With

Salman Khan's philanthropic acts every now and then, and the Being Human venture, people cannot help but fall in love with this sugar-and-spice

personality. He isn't perfect, he admits it and his fans appreciate that and hence, they even believe what he does in his films. And having dated the

reigning ladies of Bollywood (should rather be put as, having made those ladies reign in Bollywood) and being audaciously unmarried while actors

his age are discussing bringing their children in commercial cinema, the enigmatic singledom works for his fans.

No offence to his fans but when Salman Khan does a 'Dhinka-Chika' or puts a towel between his legs and thumps, the common man on the

street relates to him (alongside some others cringing or getting embarrassed watching his antics). They LOVE him for that! Ask your paper-wala,

paan-wala or taxi-wala. It's like he pays homage to the common, average Indian man, who well, IS chhichhora. Secretly, almost every buffed-up

man wants to be a Salman Khan. He said it himself that he carries off style and does dance steps that a common can pick effortlessly, that's why

he is Salman bhai. So when Pandeyji says, "Hum tum mein itne chhed karengeâ€¦" the rickshawala and secretly even you, would chuckle because,

hello! Yes, it makes for a fantastic, typically cheesy Indian punch line! And no logic at work, because come on, Salman dil mein aata hai, samajh

Ironic, it's Salman Khan I couldn't help writing about, for I'm NOT his fan. I'm amongst the ones who 'facepalm' at his cinema, happened to watch

Kick recently, couldn't ignore the thundering, whistling and clapping audience in the theatre. This piece is just an observation of the