The majestic Liberty cinema, situated in Marine Lines, is the most filmed cinema hall of Mumbai. Half of Ayushmann Khurrana-starrer Nautanki Saala was shot here while Saif Ali Khan and Sonali Kulkarni imagining themselves in a film in Dil Chahta Hai was also filmed in Liberty. There are many such examples and it’s easy to understand why – the theatre has a palace-like feel and also retains the old single screen style. As a result, it was a shock to know that in the beginning of 90s, Liberty was a faded structure, showing some objectionable films. Since family audiences had stopped coming, there was no proper washroom for ladies!

But when the nearby Metro cinema (now Metro Inox multiplex) declined to show Sooraj Barjatya’s Hum Aapke Hain Koun in 1994, Nazir Hoosein, the owner of Liberty who passed away on May 12 this year, “welcomed us with open arms”, as claimed by the director himself. He agreed to all the conditions laid down by the Rajshri Productions management – upgrade the theatre in all respects, including installing the then latest wonder, Ultra Stereo sound system.

Hum Aapke Hain Koun released on August 5, 1994 and it changed the tide for Liberty. As per Kamal Kumar Barjatya, the current booking window at this theatre didn’t open for one full year – meaning all shows were sold out in advance, even the ones on the weekdays!

Yesterday, as I reached Liberty, it seemed like I was transported back to 1994! The hoarding of Hum Aapke Hain Koun was put up and there was a huge turnout for the special screening of this classic film, held as part of its 25th anniversary celebrations. The management was not upto the mark but we finally managed to make our way inside after a few struggles. Once inside, the euphoria in the air was at an all-time high. The organizers before the screening played a fun Hum Aapke Hain Koun quiz and it was not a surprise that viewers knew all the answers, even of the most difficult ones.

The chairs were laid on the stage and the ‘ladki waale’ comprising of Madhuri Dixit and Renuka Shahane were invited on stage, along with director Sooraj Barjartya and producers Ajit Kumar Barjatya and Kamal Kumar Barjatya. It was no surprise that Madhuri was greeted with lot of love and excitement. She even recreated the ‘gulel’ moment with the host of the evening, RJ Anmol. Surprisingly, even Renuka came on stage amidst loud claps and cheers, which shows how much her character was loved in the film. Madhuri Dixit raised laughs when she said that while shooting for her first Rajshri film Abodh (1984), she viewed Sooraj Barjatya with suspicion. “Woh mujhe dekhte kya likh rahe hai kitaab mein,” (Why is he staring at me and then noting down something in a book). It was later that she realized that he’s Rajkumar Barjatya’s son and that he’s the continuity AD and jotting down make-up, accessories, props used etc is part of his job. Renuka revealed that she was given a Hindi book to read to make sure she has a clean accent. She was able to read a part of the book without the Marathi twang due to which she bagged the part. Sooraj Barjatya, at this point, interrupted and said “We told Salman bhai to read the same book and he struggled to finish reading!” 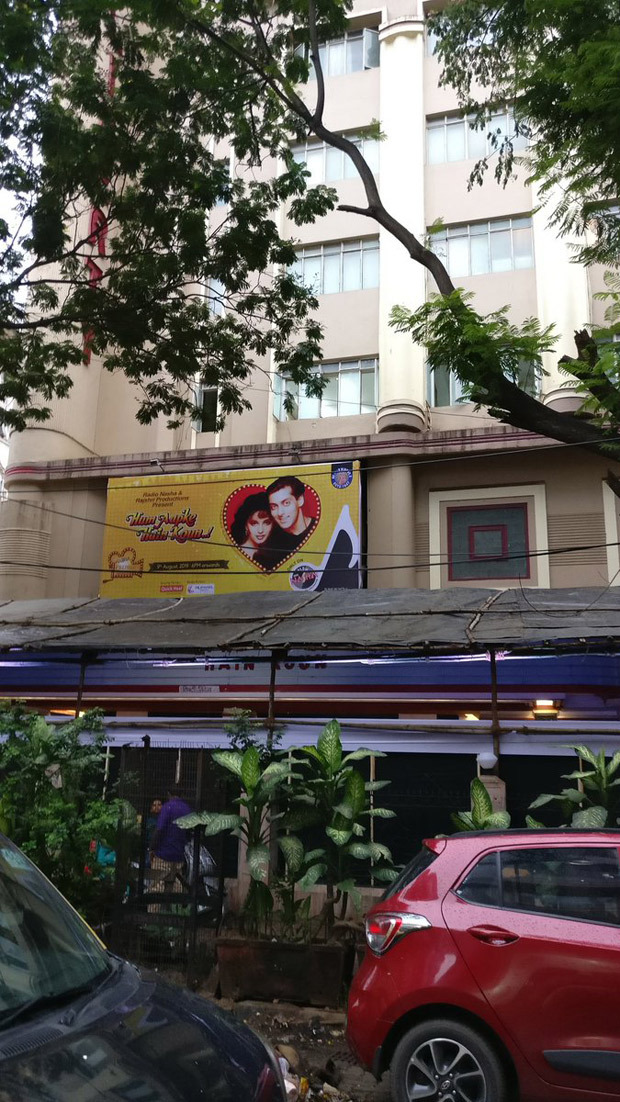 The film finally began and the whistles and hoots continued almost throughout. As soon as Salman Khan and Madhuri Dixit came on screen in the intro credit song, viewers went into frenzy. Sooraj Barjatya’s mention in the credits too elicited a great response, which put a smile on our faces. Even the smaller character’s entry scenes like Bindu, Reema Lagoo, and Satish Shah etc. generated excitement. But the surprise was the entry sequence of Tuffy the adorable dog – the way viewers cheered for him shows he’s probably the most loved animal of Hindi cinema! Dilip Joshi came on screen and almost everyone screamed ‘Jethalal’ in unison, referencing to his famous part in the famous daily soap, Taarak Mehta Ka Ooltah Chashmah!

During the interval, the organizers had a chat with ‘ladke waale’. And the moment everyone was waiting for came true – Salman Khan arrived at the venue and this was the most maddening part of the evening. Mohnish Bahl was called and even he got a rousing reception. This was followed by Satish Shah, Himani Shivpuri, Bindu and Sahila Chaddha. Madhuri Dixit and Sooraj Barjartya also joined them on stage. Salman was in his element as he fondly remembered the film, how he was given the six-hour narration of the film by Sooraj with songs, expressions et al. The banter between Salman and Mohnish was a delight. Mohnish called himself as a struggler in the 80s, and Salman taunted him as he is Nutan’s son. To which Mohnish chided Salman for calling himself a struggler despite being Salim saab’s son!

The mood turned a bit serious at this point as the team remembered those cast and crew members who have passed away - Ajit Vachani, Reema Lagoo, Laxmikant Berde, Rajkumar Barjatya and Rajat A Barjatya. They were sweet enough to add Liberty owner Nazir Hoosein since he was also like a part of the film’s team. Salman also informed that Jay Borade, choreographer of the film who also won National Award for Best Choreography, is no more and that he had an unusual interaction with him. He said that a day before he was to meet Jay Borade for Hum Aapke Hain Koun, he saw him lying on the road after meeting with an accident. He took him to Bhabha hospital and stood like a rock. They had a wonderful association over the years, so much so that Salman left all work and rushed to Mumbai when he learnt of his demise in 2014. “My first meeting with him was in Bhabha Hospital and so was my last,” said Salman. 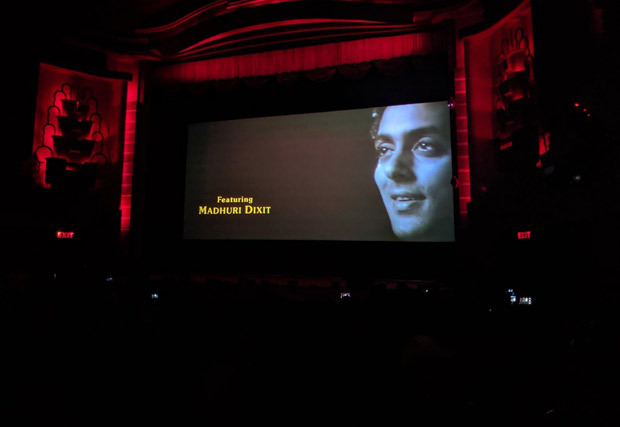 The mood slowly uplifted as Sooraj Barjatya revealed that there was a controversy when Jay Borade was given National Award and not Prabhu Dheva for Kadhalan (dubbed in Hindi as Humse Hai Muqabala). But then the chairman of National Awards, Chetan Anand, silenced them all by saying that choreography is not just about dance moves but also how it is well woven with the narrative and feel of the film and that’s where Hum Aapke Hain Koun scored big time. He also narrated that a black ticket seller was able to buy two flats by selling the tickets of the movie in black! Meanwhile, Satish Shah who played a pan-loving doctor was given a plate full of pan to chew. To everyone’s amusement, the veteran actor struggled to put it in his mouth and even smeared his hands. Immediately, Sooraj Barjatya gave his handkerchief and this gesture immediately won hearts!

Bindu, Himani Shivpuri and Sahila Chaddha then share their thoughts next. Sahila played the part of the girl who dresses up as Salman. She surprised everyone by saying that many on the set confused her with Salman! And then the biggest highlight of the evening. Madhuri Dixit and Salman Khan mouthed the famous ‘Aapne humein gulel se kyun maara’ dialogue. Salman at first forgot his lines completely and everyone busted out laughing! And then when they were asked to dance on ‘Pehla Pehla Pyaar’, they hesitated at first. But the audiences cheered and so did Mohnish Bahl. The lovely actors gave in and did a wonderful dance on this soulful melody.

The interval went on for almost 35-40 minutes but nobody minded! The second half then began and audiences remained as excited as they were in the first half. It was past midnight when the film ended. The viewers who came out were high on emotions. After all, this is a film that always entertains and touches viewers’ hearts, even on repeat viewing. And to experience this unforgettable flick on the big screen 25 years later, that too in Liberty, was an experience to cherish throughout our lives!