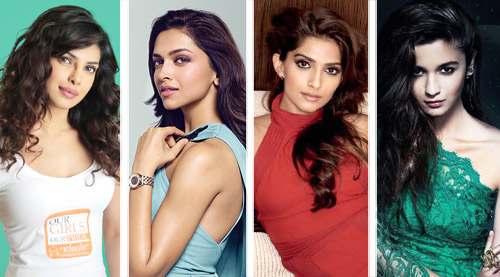 Priyanka Chopra is making inroads in the West with Quantico, then there's Baywatch and if rumours are to be believed she is having more offers from Hollywood. Deepika

may not be having a Hindi release in 2016 (Jai Gangaajal was a project that Priyanka finished last year itself). Now, is the time for actresses to make swift and sensible moves to fill into

the top bracket. Let us analyse who all are the contenders.


Sonam Kapoor has just delivered a big hit in Neerja primarily on her own merit. She also has a 200 crore film in Prem Ratan Dhan Paayo in her belt. It is time for Sonam to fly high

and grab the top position for which she has worked very hard. She has rightly decided to take her time in finalizing her next move and give a go ahead to the right script. Alia Bhatt has delivered

commercial hits and has also earned critical acclaim. With Kapoor and Sons, Udta Punjab, Gauri Shinde's next opposite Shah Rukh Khan and plum projects being discussed, this youth magnet has

the sex appeal and the requisite depth to stake a claim right at the top.


Katrina Kaif may not have had hits in the recent past but her impeccable hits-ratio suggests that she shall be in the reckoning. Shraddha Kapoor has had a string of hits. She has an enormous hunger

for success and ample amounts of talent to knock on the doors of top notch stardom. A Baaghi-Rebels in Love and Rock On 2 are the films that she is having up for release. Shraddha is

a force to reckon with. Anushka Sharma is a firebrand actress who has also turned a producer. She's an actress who'll go the extra mile to give a killer punch. Anushka is having Karan Johar's Ae

Dil Hai Mushkil with Ranbir Kapoor and Sultan opposite Salman Khan. She has also announced her next production. Anushka is a top actress and it is time for her to consolidate the position. She

is very ambitious and it is time she sorts out her personal life at the earliest. There is a volcano of talent simmering inside her that the world must get drenched in.

Parineeti Chopra may not have had a release in 2015, but she has just announced her next film in Meri Pyaari Bindu. She is in super shape and raring to go. Behind that fun and playful

exterior is a lioness hungry to pounce on the rightly deserved success. She has the exquisite looks, wealth of rare talent and then she's good with people. It counts. Kangna Ranaut is a gifted

actress and has plum projects in Rangoon, Simran and Rani Laxmi Bai. She is the only actress to propel a film in Tanu Weds Manu Returns past 100 crore and then even Rs 150

crores. Kangna is already in the top league and getting big fat pay cheques. But she also has a propensity for giving controversial quotes, rubbing people the wrong way and being aloof. For being

on the top and for staying there you need not be good with everyone but then, being nice always helps.


Sonakshi Sinha has delivered solid hits and her bindaas attitude ensures that she is in the game of throne. At all times. Akira is her most ambitious project and she's expected to give it

her all. Force 2 is another coveted project that she is part of. She is one actress who has tremendous glamorous appeal and swift acting chops. Jacqueline Fernandes has had a mega hit in

Kick, her songs in Roy became super hit, she dances like a dream and is a captivating looker. She has films like Housefull 3, A Flying Jatt and Dhishoom. She's in the reckoning for

sure though she needs to tell herself more often that she belongs at the top.


There are several other actresses who are doing good work and hold a lot of promise. It is time you let us know who according to you can fit into the top 3 bracket by the end of 2016. Time to post