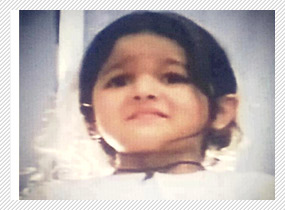 This week's release, 2 States, stars Alia Bhatt in the female lead - a

self-made actress who has yet to work with her home banner of Vishesh Films. But technically,

that's not really true - because Alia started off as a kid of seven, playing Preity Zinta's

childhood in their 1999 film Sangharsh!

In the world of Hindi cinema, this is by no means an isolated phenomenon, though there is always

that difference in terms of how and why the actors did their films. That is, whether they were

reasons for their appearance. Mysteriously, not all examples were well-known.

Taking the one-off examples like Alia first, few noticed the young boy participating in the

Anil Kapoor, however, had a stroke of bad luck when his only film as a child actor, Tu Payal

Bobby Deol is still recalled as the cute, very young he-man who effortlessly lifts an axe (made

of cardboard, as his father revealed!) and grows up to his father, Dharmendra, in Manmohan

And how many are aware that Ajay Devgn, today's angry action man, played a docile and protective

brother in Pyari Behna (1985), the moderately successful Bapu-directed melodrama? A

movie, 25 years before Bappi and Mithun joined forces in the adult Ajay's Golmaal

Occasionally, however, the one-off example extended to two or more films. We all remember the

Randhir too did one more film, Sheikh Mukhtar's Do Ustad (1958), in which

he played Mukhtar's childhood in a story that had his father Raj Kapoor as the other hero. The

Not many also remember Hrithik Roshan, who was seen dancing away with elan and just like

grandfather J. Om Prakash's blockbuster Aasha when he was just six! This was followed by

another cameo in the same year in Aap Ke Deewane, his father Rakesh Roshan's maiden

production. Hrithik's abilities to dance were already coming to the fore, and he was seen

However, junior Krrish was seen in his first meaty role when father and grandfather came

together in the 1986 Bhagwan Dada. His action scene with Danny Denzongpa when he rescues

Tina Munim and his death sequence later were magnificent, considering he was just 11 when

shooting began, proving that dancers and action heroes are all to the manor born!

Imran Khan. While Aamir can be seen as the smart kid who later grows up to be Tariq (also a

relative) in his uncle Nasir Husain's super-hit Yaadon Ki Baraat (1973) at the age of 8,

he acted a year later in his father Tahir Husain's Madhosh as well.

Imran Khan, in turn, was to play Aamir as a kid in both Qayamat Se Qayamat Tak (1988) and

Tanuja did a small role in her mother Shobhana Samarth's Hamari Beti (1950), which also

marked the debut of her older sister Nutan in the lead. But what was more exciting for this

the 1945 K.L. Saigal film Tadbir. However, Shashi was first noticed when he played Raj

the 'kid' Ashok Kumar, and 1950's highest grosser Samadhi. His child career ended with a

meaty if brief role as Raj Kapoor's young version again in the 1951 Awara. And it took

Interestingly, most child artistes then were billed at whim in every film. So while Shashi was

credited as 'Shashiraj' in his brother's films, in Samadhi he was 'Sashi Kapoor'.

child actor, also cast her again in Stree (1961), though this later top actress did four

The Professionals
However, most child stars worked usually out of economic necessities, which again meant either

taking on work as a family responsibility or being persuaded by one or both parents to do so.

(1948) at the age of 9, and after he suddenly passed away, did several films as Baby Nanda,

beginning with Jaggu (1952), Angaray and Jagriti to support her family.

till the mid-'40s as Baby Meena. Nargis, Sanjay Dutt's mother, acted in a few films as either

Baby Nargis or Baby Rani, beginning at 6 with the film Talash-e-Haq (1935). Asha Parekh

several films. After "this musical flop as tall as the sky", as Nayyar admitted once to this

Sridevi acted in not less than a dozen Tamil films, though her only Hindi film as a kid remains

Marathi debut in Zaakol (1980). Padmini Kolhapure may have achieved fame for Satyam

Shivam Sundaram, Saajan Bina Suhagan, Insaf Ka Tarazu and her nude back scene as the

possessed girl in Gehrayee (1981), but she began at 7 in the small film Ek Khilari

Chennai as 'Baby' Sonia (her real name) with Suraj (1966). Among her later films were

Dus Lakh (1967), in which her future sister-in-law Babita was the heroine, and Bimal

Then there was Sarika, Shruti Haasan's mom, who began her first innings with B.R. Chopra's 1967

Humraaz at the tender age of 5. Sarika, as moppet Suraj, would also play the roles of

boys, and her most famous turn was as the title-role of Balak, a blockbuster produced by

B.K. Adarsh, father to Taran Adarsh. Shruti Haasan herself first faced the camera at 14 for her

The male side saw names like Aftab Shivadasani, who first 'faced' the camera at 14 months as the

Farex baby! From other commercials, he moved to kid-zone in cinema with Mr India (1987)

at 9, followed by multiple films that included Awwal Number (as young Aamir Khan),

Shahenshah and Insaniyat (as young Amitabh Bachchan!) and

Most of his films were with Bhatt, notably Zakham (as young Ajay Devgn) with some more

films like Judwaa (as the young twin Salman Khans) and Raja Hindustani. It was

Sachin was one of the biggest child stars of his time, winning the National award, no less, for

his Marathi debut Haa Maazha Marg Ekta, at the age of 4! His Hindi innings began with

Zimbo Ka Beta at the age of 8 and he went on to do at least a dozen major films, with

meaty roles in Majhli Didi, Brahmchari and Chanda Aur Bijlii (as Chanda). Many of

his roles were as the childhood of big stars like Dilip Kumar, Shammi Kapoor, Dharmendra,

But perhaps the lowest profile young actor was the late Vinod Mehra, who played the young

Angulimaal. It was fitting, perhaps, that Kishore became his first adult voice in his

Children of a different kind
Shahid Kapoor and Ayesha Takia were top child models who later entered films. But there were so

many actors who moved from being busy kid actors to top character artistes - like Daisy Irani,

best known for Boot Polish, who played the lead in a few small films) and Tabassum, best

Similarly, there were a whole lot of artistes, led by Jugal Hansraj (Masoom, Loha ,Karma

and others) and more, whose careers went nowhere as actors.

And let us not forget choreographer Saroj Khan (who was introduced in V. Shantaram's 1952

which she enacted the song 'Bansuria Kaahe Bajayi'! - at the age of 5! Saroj even became

assistant choreographer at 12 with the 1960 Kalpana!

Chhota Bhai and Raja Aur Runk) grew up to be a top hero in Marathi cinema,

Sonu Nigam, is best known for playing young Suuny Deol in Betaab (1983) at 10, though he

Rakesh Roshan's Kaamchor (both 1982) and essayed Shatrughan Sinha's childhood in

Anokhi Kahani, and he don the hat again soon.