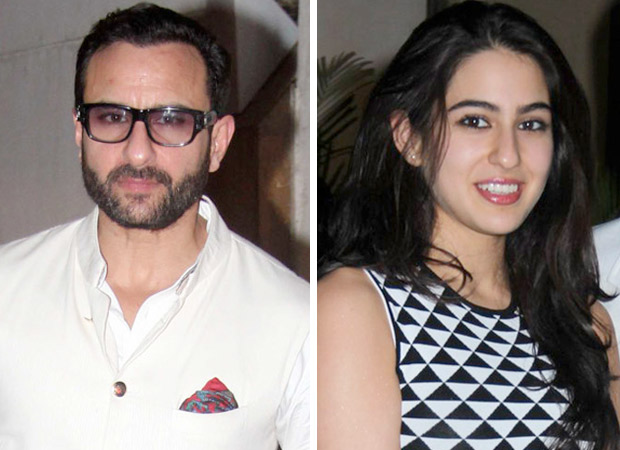 One can’t deny the fact that Sara Ali Khan, daughter of Saif Ali Khan and his ex-wife, Amrita Singh, is already making waves on the Internet with her stunning event appearances and fashion statement. The upcoming debutante is currently shooting for Abhishek Kapoor's Kedarnath alongside Sushant Singh Rajput, which is set for 2018 release.

While daughter Sara Ali Khan is all set to make her big Bollywood debut, daddy Saif Ali Khan is definitely excited about her Bollywood venture. On Wednesday, Bollywood Hungama had a fun chat with Saif Ali Khan at the trailer launch of his upcoming film Kaalakaandi where he talked about everything from films, to his Netflix show to his daughter's debut film.

Speaking of Sara Ali Khan with a wide smile on his face, Saif Ali Khan expressed his excitement and said, “I am happy. I am excited for her. I think when we get close to that release, it will be like my film releasing."

When asked whether he liked Sara Ali Khan's first look from Kedarnath alongside the picturesque location, Saif Ali Khan said, “I will wait. I want to see it properly. It is too early to get excited right now. I am very confident that she will be very good.”

Sara Ali Khan's big Bollywood debut with Abhishek Kapoor’s Kedarnath starring alongside Sushant Singh Rajput will hit the theatres on December 21, 2018. The plot of the film reportedly revolves around a love story set against the backdrop of the Uttrakhand floods of 2013.

On the work front, Saif Ali Khan stars in Delhi Belly writer Akshat Verma's directorial debut, Kaalakaandi. The film, which is a raucous tale about life, death, karma, that barrels through one monsoon night in Mumbai, talks about the journey of six characters from different walks of life.