With Ganesh Chaturthi season, many celebrities often visit the Ganpati pandal across Mumbai to seek the blessings of the Lord. One of the most popular pandals in the city is that of Lalbaug, fondly referred to as ‘Lalbaugcha Raja’. From Kartik Aaryan to Shehnaaz Gill, many of them visited the Lalbaug pandal this year to seek the blessings of Lord Ganesha. During her recent visit, Shehnaaz was accompanied by brother Shehbaz Gill and the siblings duo stood in the queue to seek blessings and ‘darshan’ of the Lord. 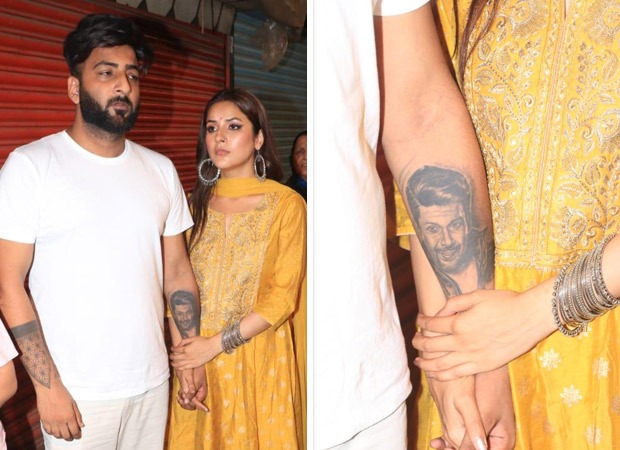 As photos of Shehnaaz Gill and Shehbaz Gill visiting Lalbaugcha Raja surfaced online, some fans realized that Shehnaaz was seen holding her brother’s arm, specifically the place where he had tattooed the face of Sidharth Shukla post his demise, as a tribute and in memory of him. Fans deduced that Shehnaaz was missing the Balika Vadhu actor and couldn’t stop commenting on it. Here, have a look at the photos:

Many fans dropped heart emojis on the series of photos. “Sana holding that tatoo #sidnaaz,” said one fan whereas “Sid is always with her,” said another. While yet another one asserted about their eternal love saying, “SidNaaz abhi bhi saath hai aur humesha rahenge”, there was a fan who said, “Seeing her with sidharth, it did something!!” “SidNaaz sath hai aur khush hai,” shared another fan.

Shehnaaz Gill and Sidharth Shukla have never inhibited from expressing their love and the bond they shared. The two actors met on the sets of Bigg Boss and were said to even tie the knot soon. However, at the age of 40 years, the actor passed away due to cardiac arrest leaving his family, his close friends, and the entire nation in shock. Shehnaaz has always maintained that she will forever remember him whereas her brother remembered him during his death anniversary recently.