The ambitious YRF – Karan Malhotra collaboration, Shamshera opened to low scores at the box office leaving the cast and crew of the film dejected. Despite the anticipation of Sanjay Dutt, Ranbir Kapoor, Vaani Kapoor coming together for the first time, the film struggled to get a good box office opening. Owing to all these factors, a day ago, director Karan Malhotra took to social media to pen a heartfelt note where he apologized for abandoning film because of all the hatred and rage it received. Now, a day later, actor Sanjay Dutt, who played Shuddh Singh in the film, has penned another letter in support of the filmmaker. 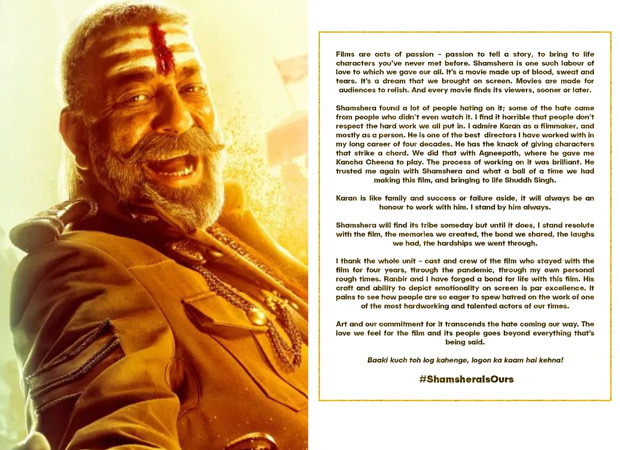 Sanjay Dutt comes out in support of Karan Malhotra; says ‘Shamshera is ours’ in a heartfelt note

In his letter, Sanjay Dutt spoke about the response Shamshera received saying, “Films are acts of passion – passion to tell a story, to bring to loife characters you’ve never met before. Shamshera is one such labour of love to which we gave our all. It’s a movie made up of blood, sweat and tears. It’s a dream that we brought on screen. Movies are made for audiences to relish. And every movie finds its viewers, sooner or later.”

He went on to add, “Shamshera found a lot of people hating on it; some of the hate came from people who didn’t even watch it. I find it horrible that people don’t respect the hard work we all put in. I admire Karan as a filmmaker and mostly as a person. He is one of the best directors I have worked with in my long career for four decades. He has the knack of giving characters that strike a chord. We did that with Agneepath, where he gave me Kancha Cheena to play. The process of working on it was brilliant. He trusted me again with Shamshera and what a ball of a time we had making this film and bringing to life Shuddh Singh.”

“Karan is like family and success or failure aside, it will always be an honour to work with him. I stand by him always. Shamshera will find its tribe someday but until it does, I stand to resolute with the film, the memories we created, the bond we shared, the laughs we had, the hardships we went through. I thank the whole unit – cast and crew of the film who stayed with the film for four years, through the pandemic, through my own personal rough times. Ranbir and I have forged a bond for life with this film. His craft and ability to depict emotionality on screen is par excellence. It pains to see how people are so eager to spew hatred on the work of one of the most hardworking and talented actors of our times. Art and our commitment for it transcends the hate coming our way. The love we feel for the film and its people goes beyond everything that’s being said,” he concluded.

Speaking of Shamshera, the film is historical drama with Sanjay Dutt playing the antagonist, Ranbir Kapoor as the protagonist in a double role whereas Vaani Kapoor plays Ranbir’s character Balli’s love interest. The film released on July 22 in Hindi, Tamil, and Telugu.