The ultimate cutie-pie of Indian television, 11-year-old Ruhanika Dhawan is pitted against the National Award winning Zaira Wasim, now 18 years of age, in the actor category for the YONO SBI 20under20 award. Completing the trio is another teenager, Sparsh Khanchandani, 18, a very popular face on television. 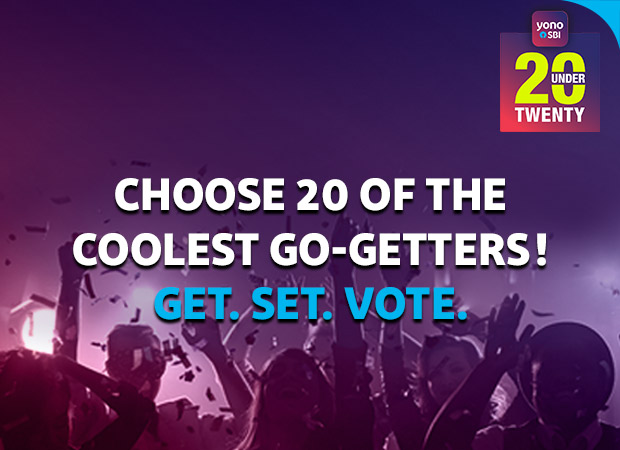 Among the boys, young promising actors such as 19-year-old Mumbai boy Faisal Khan, 18-year-old Marathi actor Parth Bhalerao, and international star of Lion fame, 11 year old Sunny Pawar from Pune are in the fray for the YONO SBI 20under20 award.

These names are a sign that YONO recognizes the power of storytelling, cinema and television, as an influence on the youth of today.

It will be exciting to see whom India will vote for, among these immense powerhouses of talent, all under 20, that have battled the odds to find opportunities to express their talent.

The actors have been shortlisted by a revered jury. Dia Mirza, actor and United Nations goodwill ambassador for the environment, who was on the jury said, "It is a mix of talent as well as charisma, and each of these promising performers have oodles of the same. Make sure you vote for your favourite."

Mumbaikar Ruhanika Dhawan shot to fame as Ruhi in Ye Hai Mohabbatein while Sparsh Khanchandani gained popularity because of her role as young Ichcha in the television series Uttaran. Zaira Wasim delivered a 'dhakkad' performance in the biographical sports drama Dangal and followed it up with Secret Superstar. Currently, she is working for Shonali Bose's film The Sky is Pink.

Faizal Khan is a talented dancer and has also appeared in the historical drama Bharat Ka Veer Putra - Maharana Pratap. Parth Bhalerao debuted in the movie Bhoothnath Returns with Amitabh Bachchan, and followed it up with several Marathi hits such as Lalbaugchi Rani, Boyz 2, Firkee, Boyz, Disco Sannya and Vees Mhanje Vees. Sunny Pawar comes from a humble background and his work in Love Sonia starring Frieda Pinto and Garth Davis's Lion has been well-appreciated.

Veteran celebrity and society journalist Mark Manuel, and interim jury member for YONO SBI 20under20 said, "These are promising new names, and definitely those to watch out for".

The YONO SBI 20under20 award was instituted to celebrate the successful completion of a year of YONO, SBI's new age digital bank, and to connect with a new generation of influencers from all walks of life who have found inspiration or success at a young age.