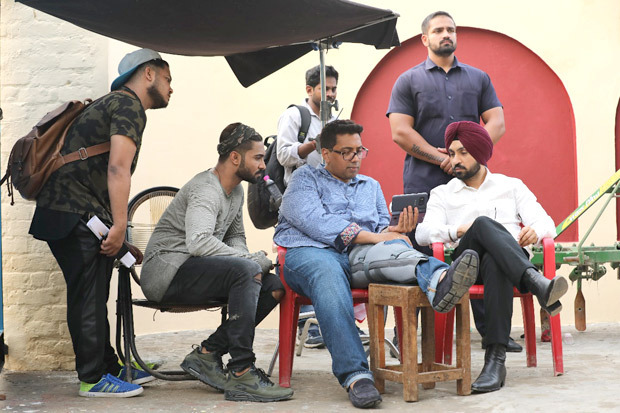 By now, readers may be aware that director Chakri Toleti is making his directorial debut with the one of the kind film produced by Wizcraft that marks their foray into Bollywood film production, in collaboration with Vashu Bhagnani. The comic caper features Sonakshi Sinha and Diljit Dosanjh in lead roles and is currently in the process of completing another major schedule. However, we now hear that a mishap on the sets of the film has left everyone rather upset.

During the recent shoot, filmmaker Chakri Toleti was explaining a scene to Sonakshi Sinha and Diljit Dosanjh and was deeply engrossed in it. The scene was supposed to feature a sequence which included an oil spill wherein the two actors had to slip and fall. While Chakri was explaining this amusing scene they were all standing at a height on a stage. However, what he did not realize was that the oil had already been on the floor and the crew was still preparing for the scene. Unfortunately, Chakri slipped and had a major injury to his leg.

The shoot was on a halt for half a day until the doctors gave a go-ahead to him to continue working. Since he has badly fractured his leg, he is expected to wear a plaster for 25 days. The shoot has resumed and the team has started continuing with the shoot of the film. Talking about the incident, Chakri Toleti said, “It was an unfortunate incident but now I'm recovering slowly. We had to halt the shoot for some hours but with the support of the Sonakshi, Diljit and the crew we managed to finish the shoot in the decided time.”

Based on the happenings of the award gala IIFA including its backstage shenanigans, reports have it, that the film in question is titled Crazy Hum. While the schedule of the same has kick started in New York, the unit is currently in Ahmedabad wrapping up another major schedule.