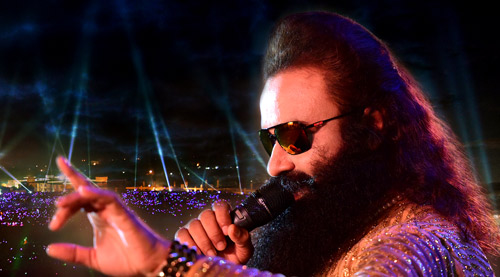 With its strong appeal, MSG 2 has achieved a feat like no other Bollywood Film, in recent times by completing a whopping 300 days running in cinemas. Going by the trend, MSG 2 is well on its way to make its run right up to its first release anniversary on September 18. In fact MSG 2 is continuing its successful run in cinemas in the northern parts of the country while it also made a strong showing down south in Telangana. The film had been released abroad, in many countries including USA, Canada, UK, Singapore, Italy, New Zealand, Australia, UAE and France.

Starring Saint Dr. Gurmeet Ram Rahim Singh ji Insan in the lead role and also in the role of director, singer and touching almost every department with his amazing versatility, MSG 2 is based on true story on the life of savages and their reforms. Audiences seem to have connected to this unique story line and embraced the idea of cinema for social change. As Saint MSG puts it, "The number of people who come for free de-addiction to the Dera has swelled manifold, which is a direct outcome of the film's success."

It had a spate of bookings that led to special screening drives. For instance, as many as 777 shows were a screened in a day in Rajasthan, 707 Shows in Punjab and 468 in UP that too in the 6th week of the film's run in cinemas. On the 54th day of its release, MSG 2: The Messenger was screened in 127 screens in 22 cities in Haryana, clocking more than 1000 Shows in a day. In Punjab cinemas, in its 10th week, MSG 2 had a run of 50 shows in Chandigarh alone in a day, similarly for other cities, outweighing films like PRDP and Spectre, which were barely in their first week, as per independent news reports. Telangana too has registered a total of 700 shows. Twitter is also buzzing with hashtags related to MSG 2, which are a regular feature on the national and international trending list.

While Saint MSG is busy with the other 2 ventures, one mega flick titled Online Gurukul, which is based on Vedas merged with entertainment, it is a film high on VFX, the other venture titled MSG: The Warrior - Lion Heart, is on the verge of completion. The audiences can expect the next installment in cinemas soon. The wait is soon going to be over to see their heart throb in a new avatar, rather (Avatars). We hear Saint Dr. Gurmeet Ram Rahim Singh Ji Insan, has multiple roles in the upcoming venture.