The Kapil Sharma – Sunil Grover fights have become increasingly commonplace in the industry and it is not even surprising that the two talented comedians resort to public platforms to wash their dirty linen. They have a long history of feud and it is as if they can’t stay peacefully, with or without each other. After Kapil’s infamous drunken brawl last year, the two had a passive-aggressive interaction on Twitter, much to the chagrin of their fans as Grover vowed never to work with Sharma again. Since last three days, the two have been engaged over Twitter war again as Kapil is coming up with a new show Family Time With Kapil on Sony TV. 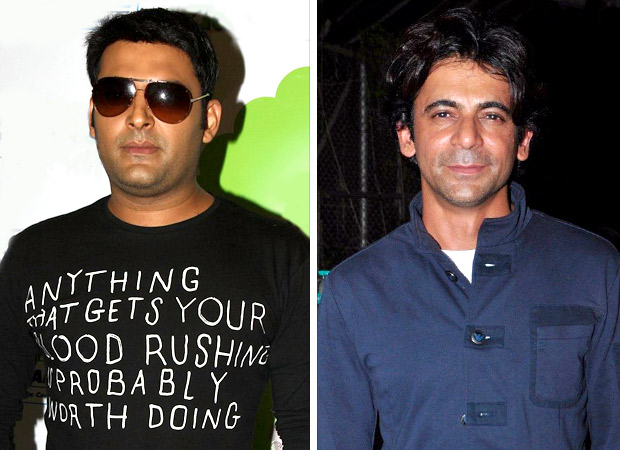 So, apparently Kapil tried to reconcile with Grover and persuade him to come back on the show but Grover took to public platform Twitter to announce that he never got a call from Sharma. Post this, Kapil called him a liar! Well, this led to the series of savage tweets from the both comedy stars.

This led to a series of angry tweets from Kapil Sharma who has a reputation of losing his cool ever too often. Kapil wrote, “Paji I called u more then 100 times n came to ur house to meet u twice .. every time u were out for some show n all .. pls don’t spread rumors that I didn’t call u.”

Kapil then kept interacting with his fans and adding fuel to the fire about his fallout with Sunil. He even referred to last year when Kapil apparently assaulted Sunil on the flight back from Melbourne to Mumbai. He said, “Yes I love him.. but sometimes it hurts u a lot ..when u do a lot of hard work for somebody n he just want fame on ur name .. abhi qyun bola ? Ek saal ke baad ?.”  He kept reinstating on this and called Sunil a ‘liar’. He tweeted, “Yes .. he is lying .. I called him 100 times n sent my people to his home .. even I went to his home to meet him for the show .. but now I will not let anybody take any advantage on my name .. enough is enough.”

Sunil had a fitting reply to the once ‘King Of Comedy’ as he expressed himself after fresh allegations, “I am not hurt. I know he called me a liar and also said pehle hassa ke dikha logon ko. I am worried about Kapil's health. Just look at the time of the tweets. How can I be hurt? I just pray to god that Kapil stays healthy and takes care of himself." 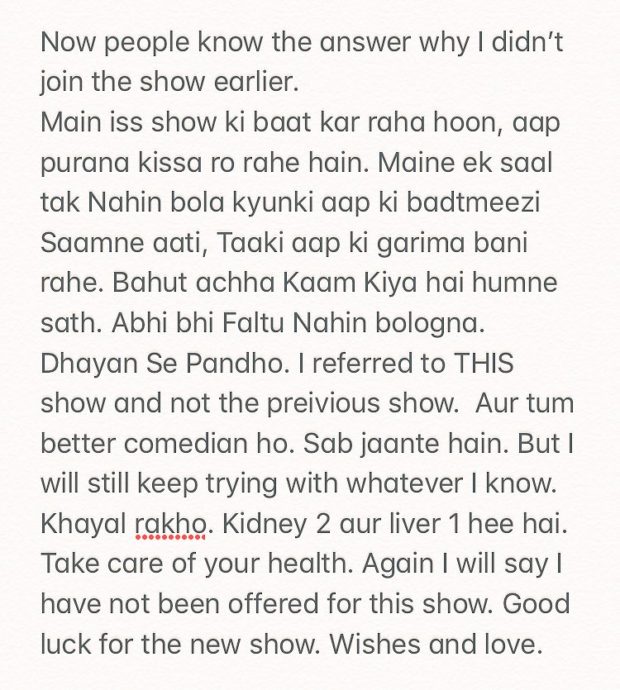 Now quick recap to 2017. Kapil had reportedly verbally and physically assaulted Sunil and colleague Chandan Prabhakar on flight and his drunken brawl shocked everyone. Sunil decided to quit Kapil’s show and took to Twitter to express his angst. Kapil gave a prolonged apology but it not work.

He even took to Twitter to write, “@WhoSunilGrover today packed up at 6 am after so long n I missed so many things.. love u .. see u in evening at ur home .” But Sunil stood on his ground and wrote that enough is enough and he will not take things lying down from him anymore. He wrote, ““Bha ji! Yes, You hurt me deeply. Working with you has been a learning experience. Just one advice start respecting human beings also apart from animals. All are not as successful as you are. All are not as talented as you are. But if they all are talented like you, who will value you. So, have some gratitude towards their existence. And also, If someone is correcting you, don’t abuse that person. Refrain from using foul language In front of women who had nothing to do with the stardom you carry, they are by chance just traveling with you. Thanks for making me realise it was your show and you have power to throw out anybody, anytime. You are the wittiest, and the best in your field. But don’t act like a ‘God’. Take good care of yourself. Wish you lot more success and fame.”

Also Read: EXPOSED The real reason why Sunil Grover is NOT in Kapil Sharma’s new show