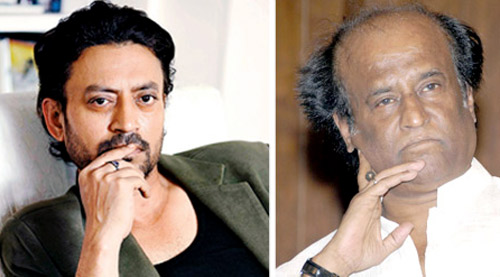 Irrfan Khan, who is currently promoting his film Madaari, recently called out Tamil superstar Rajnikanth for stealing his film's poster. The poster in question has the faces of the lead actors Irrfan Khan and Rajinikanth from one side with several buildings and skyscrapers standing horizontally next to their faces.

During the promotion of Madaari in a mall, Irrfan Khan got to know about the Kabali poster and accused Rajinikanth and the makers of stealing their poster design. He said, "Even I didn't know that. We are small filmmakers, I saw that Rajinikanthji's film stole the poster of our film. You see his film's poster and see our film's poster. No issues. Watch his film and watch our film, too."

After the word reached Rajinikanth fans, they came forward in support the star to clarify about the same and it turns out that the poster is actually a fan-made one. Neither the official page has that poster nor has Rajinikanth shared it on his twitter account. He had shared only two official posters last year. It seems like that even the makers of Kabali may not be aware of the poster.

Irrfan Khan surely seems to have goofed up with this by announcing the poster design theft without cross checking the facts.

Rajinikanth's Kabali and Irrfan Khan's Madaari are slated to release on July 15.