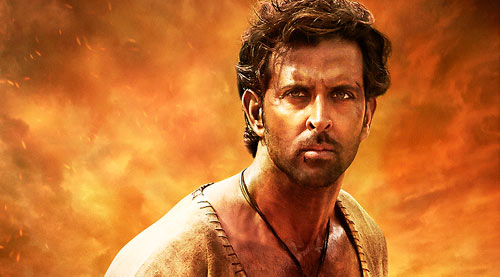 Hrithik Roshan is taking keen and personal interest in every aspect of the marketing and release of his new film Mohenjo Daro which opens in August. The first poster of Ashutosh Gowariker's Mohenjo Daro is out. As expected the poster which shows Hrithik Roshan against a glowing orange backdrop has created an internet sensation.

Hrithik Roshan says he is very pleased with the outcome. "A few years back the poster of Raj Kumar Hirani's PK revealed the potential impact one single image can have. And now to experience that myself for Mohenjo Daro is truly overwhelming."

Hrithik feels Mohenjo Daro will be among his best works. "The impact of the posters holds testimony to the sheer hard work that has gone behind every single aspect of this fantastic movie."

A source close to the historical costume drama reveals, "Hrithik has not had release since Bang Bang in October 2014. He is hands-on with this one. He's working very closely with Ashutosh Gowariker to create a near-perfect atmosphere for the film's release."

The film releases on the same Friday as the Akshay Kumar starrer Rustom. Sources say, UTV the producers of Mohenjo Daro have booked theatres across India and overseas well in advance.