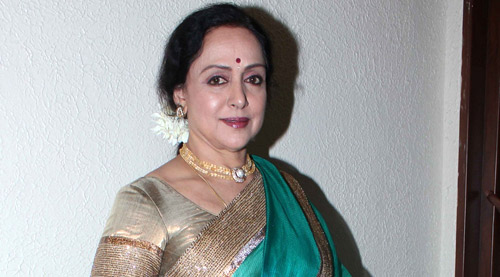 Veteran actress and politician Hema Malini recently got flak on social media owing to a few pictures of an ad shoot posted by her as people in her constituency were combating violence. The actress turned politician however condemned these acts strongly and responded to the trolls on her Twitter handle.

A mob attack between encroachers and police turned much violent as it resulted in increasing death rates in Mathura, the constituency that falls under actress-turned-politician Hema Malini. Amidst the chaotic situation, Hema Malini who was wrapping up her endorsement commitments in Mumbai, posted a few pictures from an ad shoot also stating about how she could travel from Madh to the city with ease. Her tweets not only gained attention but further resulted in trolls where the veteran actress received flak for being insensitive, considering the situation in her constituency.

Not keeping mum, Hema Malini too reacted on Twitter, saying, "I fervently appeal to the people of Mathura to remain calm & not get misguided by violent elements. I am constantly in touch with authorities/karyakartas in Mathura.I am on my way to Delhi and will reach Mathura at the earliest." She further added, "I am a very sensitive person.I am deeply pained on the Mathura incident but Law & Order of U.P is the core issue. Let's not divert." Stating that she is just doing her job, Hema also said, "In Mathura&condoled with the bereaved families.I still can't understand how the great media thinks the sansad is responsible for law & order. They seem to be diverting attn frm the main issue -tht law & order is purely the state govt's responsibility.Why target me? I'm doing my job."

Upset with the way the social media reacted to her absence during the Mathura controversy, Hema also mentioned, "Anyone in Mathura will vouch for my sincerity - I'm improving living conditions, providing roads& drinking water. Rawal has undergone change. A sansad's duty is not to head the police force or quell rebels or evict encroachers. Development is my line of duty & I'm sincere in my job. I'm dedicating so much time to Mathura. Sometimes it is days before I even see my family or my house. Im attending to public needs sincerely. Wht do I get in return for my sincerity?Brickbats & loud accusations. I sincerely thank all of you who have supported me in ths controversy."

Hema Malini is currently in Mathura and has been meeting families who are victims of this Mathura attack. Sharing a few pictures on social media, Hema said, "Just visited Nayati hospital to enquire abt the welfare of the injured police personnel.Met the family members- father, wife, brother & son of SP City Mukul Dwivedi & expressed my deep grief at their loss."

Sonu Sood helps a farmer by providing a…