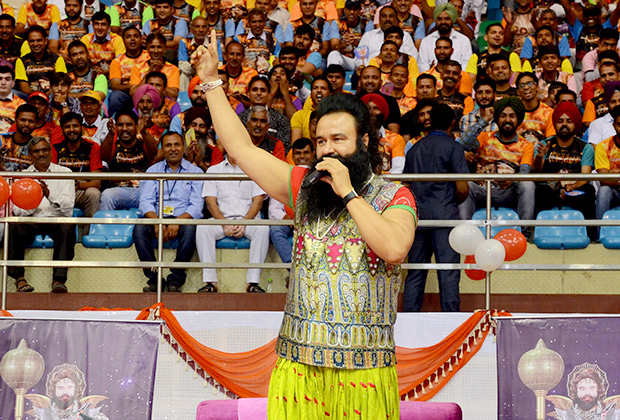 Guruji himself rode on his modified SUV trike in the city to attend the function and it was a real traffic stopper. Led by a cavalcade of bullet motorcycles, MSG wowed Delhi as everyone seemed desperate to catch a glimpse of him and his novel three-wheeler SUV. BJP leaders who attended included Kailash Vijayvargiya, Arun Singh, Orissa MP Dr. Prasanna Kumar Patsani, East Delhi Mayor Satya Sharma etc. Boxer Manoj Kumar was among a host other dignitaries who attended the show. Guruji had an interaction with the press in the beginning and shared many interesting facts about the film. His daughter and co-director Honeypreet Insan also answered media queries.

When quizzed by the media about the politicians who are questioning the surgical strike on the terror hubs in Pakistan, Guruji had a befitting reply for their comments. He said that those doubting thomases should be pushed alongside the army and should be made to join the action right up front. Once they suffer bullets first hand, they would not have any doubts left. Apart from this Saint Dr. MSG also talked about another film he has written that continues the fight against terror. In fact the film that has written is expected to come out soon.

For the premiere, thousands of ecstatic fans reached the stadium that was turned into a theatre along with the film's cast. It was a real carnival with long festive queues outside the stadium. The fans wore Lionheart T-shirts and celebrated by dancing, singing and hooting. Scheduled to be released on October 7, the first half of the film was shown in the premiere. And the fans went ballistic and savored every moment.

MSG’s different styles and the film's action scenes were extremely well received by the fans. At every high point, people couldn’t resist whistling and hooting on the songs and dialogues. The film is all action and high drama and the rich heritage of India is depicted brilliantly. The two songs of the film ‘Dhol Baaje’ and ‘Varsha Aayi’ have become super hits. 5 giant LED screens were put up in the indoor stadium with a mega wattage surround sound system and the fans looked resplendent.

As for the film, MSG The Warrior-Lion Heart, has already established two more record within the Asia Book of Records, one for most credits in a film and the other for the largest number of oil lamps lit. Slated for release on October 7, the film will feature Saint Dr. MSG essaying 3 roles that includes him being the Lion Heart, an ultra-modern secret agent, a traditional Rajput warrior from 300 years ago called Sherdil and that of one of their ancestors.

Akshay Kumar REACTS on being summoned in…

Rakhi Sawant gets defamation notice from…

“I am best qualified to expose Honeypreet &…