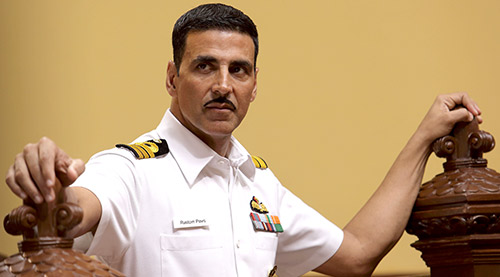 It is a good sight when the entire film fraternity comes forward to support each other's work. This time, the industry has banded together to support Akshay Kumar's upcoming film Rustom on social media. It all started when Salman Khan urged his fans to go for Rustom, which was followed by Ranveer Singh, Sonam Kapoor, and several other industry members.

The latest to join the bandwagon is superstar Rajinikanth himself. Rajinikanth, who starred in the highly publicized Kabali, shared a supportive message sending Akshay Kumar all the luck for the film. He wrote, "Dear @akshaykumar ... I wish you all success for your forthcoming release #Rustom." Overwhelmed by seeing the support from the superstar himself, Akshay replied, "Thank you so much Rajni sir. Would love for you to see it."

Akshay Kumar's Rustom is a story based on KM Nanavati case that took place in 1959 in which Naval Commander Kawas Manekshaw Nanavati was tried and acquitted for the murder of Prem Ahuja, his wife's lover and that changed the entire face of Indian Judicial system. Akshay plays the role of Naval officer Rustom Pavri and Ileana D'cruz plays his wife Cynthia Pavri. Directed by Tinu Suresh Desai, Rustom also stars Arjan Bajwa and Esha Gupta and is slated to release on August 12.