Over the past few years, we have seen the rise of superhero films that have now become one of the best performing movies at the box office. In fact, Marvel has developed a fan base for almost each and every character they have, with standalone films doing brisk business. However, away from the Disney – Marvel universe, this week we see the release of a film based on Sony owned Marvel character, Venom. Starring Tom Hardy, VENOM features a character from the Spider-Man line of comics that features a grey character outline. An anti-hero at best, Venom is a symbiot that bonds with a host absorbing the personality and enhancing the host’s traits. But will this introduction of a relatively lesser known anti-hero work at the box office is what we analyse. 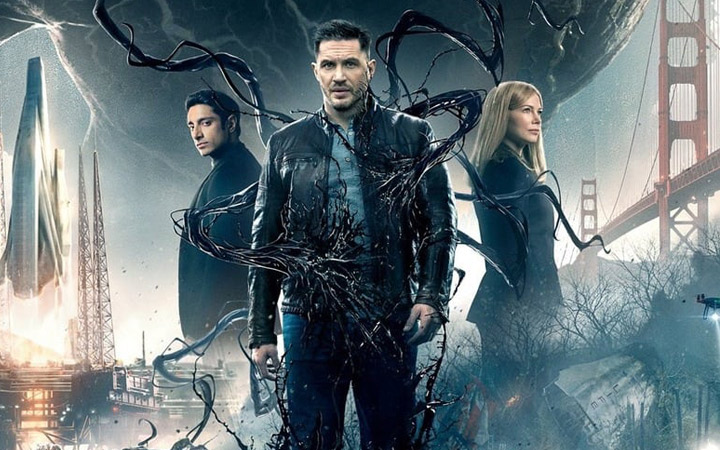 VENOM starts off with a space craft belonging to the CEO of Life Foundation - Carlton Drake (Riz Ahmed) that was on an exploratory mission crashing into earth. Carrying a payload of symbiotic lifeforms from deep space, the craft is destroyed on impact. However, while four specimens are recovered from the crash, one escapes. After the four are brought back to the Life Foundation research facility in San Francisco, Drake, becomes obsessed with bonding symbiots to humans to prepare humanity for Earth's inevitable ecological collapse, and begins illegally experimenting on vagrants, resulting in numerous deaths. In the meantime, investigative journalist Eddie Brock, who arranges an interview with Drake through his girlfriend Anne Weying, a lawyer affiliated with the Life Foundation confronts Drake with confidential materials indicating wrongdoing that he stole from Weying's e-mail, leading to them both being fired from their respective jobs and the end of their relationship. Six months later, Brock is approached by one of Drake's scientists, Dora Skirth, who disagrees with Drake's methods and wants to help Brock expose him. With her aid, Brock breaks into Drake's research facility to acquire evidence from his crimes, in the process learning that an acquaintance of his, Donna Diego, has become one of Drake's subjects. Brock attempts to rescue her, but Donna attacks him and the symbiot possessing her, transfers from her body to his, killing her in the process. Brock manages to escape, but soon begins displaying strange symptoms. Will Brock also fall victim to the symbiot, will the symbiot overpower its host, or will the two merge into one being is what forms the rest of the film.

VENOM starts off detailing the character of Eddie Brock, the investigative journalist and Carlton Drake, the CEO of life Foundation, and from here the film quickly moves on to establish the basic premise of how the symbiots arrive on Earth and what their mission is. Director Ruben Fleischer does a good job in keeping the proceedings fast paced and gripping at the same time. Not once does the film slow down, instead the script keeps the viewer on the edge of their seat with constant shifts and well executed action sequences. A special mention here needs to be made for the Visual Effects team that have done well to integrate CGI and live action sequences seamlessly. This facet is evident in multiple scenes through the film, especially since the subject matter involves a ton of CGI.

Coming to the performances in the film, both Tom Hardy as Eddie Brock/ Venom and Riz Ahmed as Carlton Drake/ Riot, have done an impeccable job with their given roles. Well timed humour and perfect timing in crucial moments propels the overall appeal of the film. Similarly, the rest of the cast, comprising of Michelle Williams as Anne Weying, and Reid Scott as Dr. Dan Lewis have done a decent job in their limited roles. Despite being a film that focuses solely on one character, VENOM features well detailed characters for each of the cast members.

On the whole, VENOM makes for a fun action packed movie that keeps you in your seat. The constant twists and the rapid action does not let the tempo of the film drop. For the Indian market, being a film that does not come after any predecessor, VENOM is easy to understand and builds a story line around a lesser known character that can eventually become a major league player. At the box office, with competition from two other Bollywood releases viz. LOVEYATRI and ANDHADHUN, VENOM will face stiff competition. However, the wide release in four languages will work in favour of the movie.