A little over four decades ago, in 1977, the first film in the epic Star Wars saga (that would extend over years to come) released with the release of A NEW HOPE. Now after nine films in the saga, we see the release of a spin off story line that brings fans in touch with the origins of one of the most loved characters Han Solo. But will this new age space western do justice to the mammoth legend of Han Solo or will it like so many other spin off/ origin satires falter, is the question of the hour. 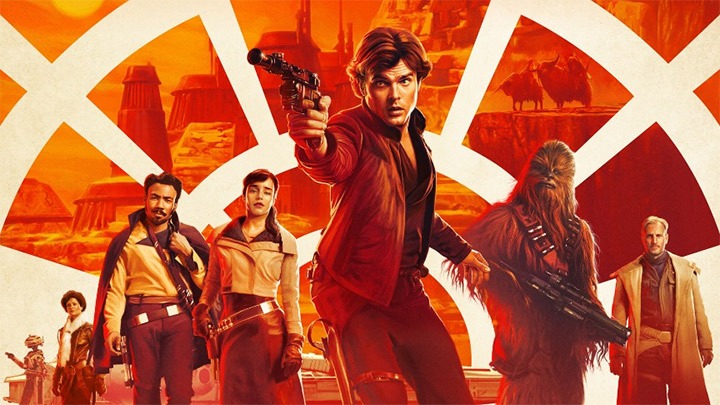 SOLO: A STAR WARS STORY follows the escapades of Han Solo before he became the legend. Starting off from the early days, the film depicts the squalor that Solo came from that was ruled by the tyrannical Lady Proxima and his constant schemes and efforts to pay his way out. Besides this like most of the films in the saga, this one too features a budding love story angle between Solo and Qi’ra. But will the two young romantics find a way out of the hell hole or will they fall prey to the Empire’s growing power is what forms the rest of the film.

Starting off one must bear in mind that the happenings in SOLO are dated before the rebellion came into being. In fact the film goes on to depict the rise of the Empire into a force to reckon with. While at the same time laying the base upon which the legend of Han Solo is built. If that wasn’t enough, through a series of daring escapades deep within a dark and dangerous criminal underworld, Han Solo meets his mighty future co-pilot Chewbacca and encounters the notorious gambler Lando Calrissian, in a journey that will set the course of one of the Star Wars saga's most unlikely heroes.

First things first, with director Ron Howard at the helm of the film, one expects nothing less than a visual spectacle. Known for films like APOLLO 13, A BEAUTIFUL MIND and more recently RUSH and INFERNO, Howard brings with him, expectations of a space western film on epic proportions. However, unlike Howard’s previous cinematic outings, SOLO: A STAR WARS STORY offers little scope for sweeping cinematic visuals. Despite this, when given the chance to depict a world that has been ravaged by time, Howard works his magic with aplomb. Going into SOLO: A STAR WARS STORY, viewers are already aware of the fact that it will feature some of the high points of Han’s life that eventually made him the smuggler with a heart of gold, unfortunately this exact premise hampers the entire telling of what could become an epic due to the limited scope to explore unknown avenues, a detail upon which most of the film in the Star Wars franchise that thrived. But despite this, Howard has managed to pull together an enjoyable film that sadly looks like a series of highlight from a character’s life.

Coming to the performances, Alden Ehrenreich is no Harrison Ford, but he does manage to do a commendable job with the role of Han Solo. Joonas Suotamo as the lovable Chewbacca and Donald Glover as Lando Calrissian are sorely underused. Despite having prominent roles in the film, both their characters (though only supporting roles) appear to be greatly under developed and half baked. One wishes that both Chewbacca and Lando were given more meatier chunks to explore the entire depth of their characters. But it is the roles of Woody Harrelson as Beckett and Emilia Clarke as Qi’ra that come across the most dejecting. In fact, both good actors in their own right fall flat with a narrative that focuses on Solo alone. While one wishes that these two were used more to their full potential being a Han Solo film, they are relegated to the shadows serving only as waypoints to take the story forward.

However, the biggest drawback of SOLO: A STAR WARS STORY is the writing and the narrative, with most of the suspense lost, the makers have had to rely heavily on the epic tale of Solo to develop a narrative that does justice to his character. Sadly, this does not suffice. Instead the film comes across as a rather poor attempt at developing a new story line to encash on an epic saga that has neared the end of its money making heydays. Simply put, with an underwhelming story and weak narrative SOLO: A STAR WARS STORY is devoid of that charm and charisma that have over the years endeared the epic of STAR WARS to so many fans.

Even the background score of the film, unlike most Howard directorial seems greatly underused. With a fall back to the now legendary Star Wars theme every now and then, this new venture offers very little to the viewers. But it isn’t all downhill. Though limited, the action and race sequences are well shot and choreographed but one wishes there were more. The CGI too though done well could have been so much better had the story line of the film given room to develop a bit more.

On the whole, SOLO: A STAR WARS STORY leaves you with a somewhat empty feeling. With nothing new to tell in the story and very little scope to deviate from the past, the film becomes just another run of the mill cinematic outings that is developed to cash grab the last bits of money from a fading franchise. At the box office, with the John Abraham starrer Parmanu releasing alongside the film, SOLO: A STAR WARS STORY might just face a hard time raking in the numbers.