The entrepreneur spirit of the Gujaratis is well known globally. However, this aspect and the overall flavour of Gujarat hasn’t been captured well in our films. Barring KAI PO CHE (2013), none of the films based in Gujarat in recent times like GORI TERE PYAAR MEIN (2013), SWEETIEE WEDS NRI (2017), PATEL KI PUNJABI SHAADI (2017) and YAMLA PAGLA DEEWANA PHIR SE (2018) have failed to do justice to the Gujarat setting. Now FILMISTAAN director Nitin Kakkar tries his luck with a film based in a Gujarat city. So does he manage to put up a convincing show? Or does he fail in the process? Let’s analyse. 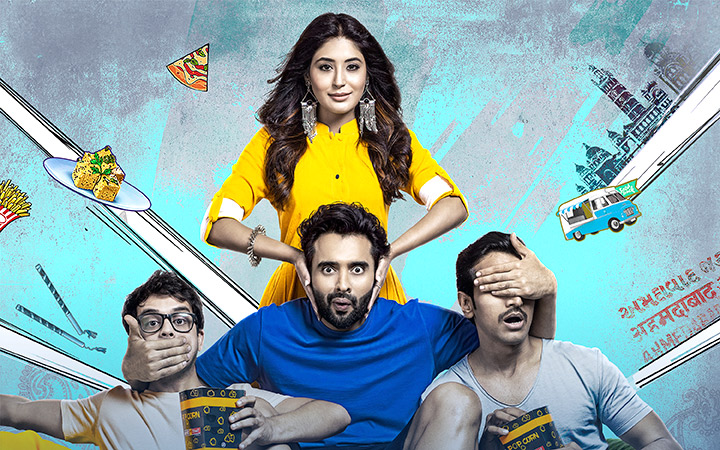 MITRON is the story of two people, both of whom are the black sheep in their respective families. Jai (Jackky Bhagnani) is a good for nothing youth in Ahmedabad. His father (Neeraj Sood) leaves no opportunity to chide him for wasting his life despite having a degree in automobile engineering. His interest lies in cooking and even he starts a YouTube channel. But it doesn’t pay dividends. He’s advised to make prank videos as it can get record views. Sadly his father catches him in the act. He decides to get him married, as per the recommendations of an astrologer and also with the hope that it’ll make him responsible. Meanwhile, Avni (Kritika Kamra) is a smart, responsible girl. She too doesn’t get respect from her father (Sunieel Sinha) since he always wanted a son. Hence he can’t wait to get her married. Avni is in love with Vikram (Prateik Babbar) and both plan to start a food truck business and also eventually settle down. However Vikram ditches her suddenly. Avni then accepts her father’s suggestion for arranged marriage. At this point, Jai and Avni meet. What happens next forms the rest of the film.

Sharib Hashmi's story is adapted from a Telugu film PELLI CHOOOPULU (2016), which is written and directed by Tharun Bhaskar Dhaassyam. It is interesting and although a bit clichéd, it has potential. Sharib Hashmi's screenplay is entertaining and engaging. The food truck and the good for nothing character gives a déjà vu of CHEF (2017) and BAND BAAJA BAARAAT (2010). Sharib Hashmi's dialogues are quite creative and hilarious.

Nitin Kakkar's direction is neat and uncomplicated, despite the non-linear narrative in the first half. In the second half, he could have done a better job at few places. This is especially in the scene where Jai gets late for the engagement brunch. That he had too much of drinks a day before and the manner in which he had no plan in place for the snacks that he was supposed to prepare seemed very unconvincing. Moreover, the title of the film doesn’t completely capture the film’s essence. However, overall Nitin managed to capture the flavour of Gujarat very well.

MITRON's first ten minutes are flat with none of the jokes working. It’s only when Jai and Avni get trapped in a room and they narrate about their life is when the film picks up. The flashback is told interestingly; notice how the actors break the fourth wall at places smoothly while narrating their tale. The manner in which Jai catches his girlfriend Shruti indulging in cheating is sure to bring the house down. Also, Jai's attempt at pranking people by pretending to immolate himself is hilarious. The track of Avni and Vikram begins unexpectedly but it has its moments. The twist during the intermission point works. Post interval, the fun continues. The humiliation faced by Avni at the engagement brunch is a crucial sequence handled well (although the scenes that lead to it are difficult to digest) and also the following sequence involving Jai and Avni's father. The pace does drop here but it gets back on track in the climax.

This is a comeback of sorts for actor Jackky Bhagnani (his last Hindi film was WELCOME TO KARACHI in 2015) and he gives a genuinely good performance. He gets the diction right and keeps his act controlled. Kritika Kamra makes a very confident debut. She gets chance to display her talent in the second half. Pratik Gandhi (Raunak) steals the show and gets to mouth some very funny one-liners. Deepu (Shivam Parekh) gets totally sidelined. Neeraj Sood also ensures he doesn’t get overboard and irritating and does a fine job. Prateik Babbar is impressive. The actors playing Perline (Richa) and Shruti (Jai’s girlfriend in the call centre) are okay.

Songs are quite peppy and reflect the mood of the film. 'Kamariya', played in the intro scene and during the end credits, is the best song of the lot and is bound to linger in one’s mind for a long time. 'Sawarne Lage' comes next and its theme music is a bit loud but again, very catchy. 'Ghar Ke Hai Na Ghat Ke' has a nice 80s vibe and is also sung by Bappi Lahiri. 'Chalte Chalte' is sweet. ‘Door Na Ja’ doesn’t make much of an impact although it’s sung beautifully by Sonu Nigam. Sameer Uddin's background score is fun and dramatic.

Manoj Kumar Khatoi's cinematography gives the film a commercial touch. The locales of Ahmedabad, especially the long shots, are well taken. Urvi Ashar Kakkar and Shipra Rawal's production design is fine, with the food truck standing out. Mandira Shukla's costumes are quite real and appealing. Sachindra Vats's editing is quite impressive, especially in the first half.

On the whole, MITRON is a feel-good film and can surely appeal to the family audiences. Unfortunately, the lack of buzz and acute competition this week will prove detrimental.