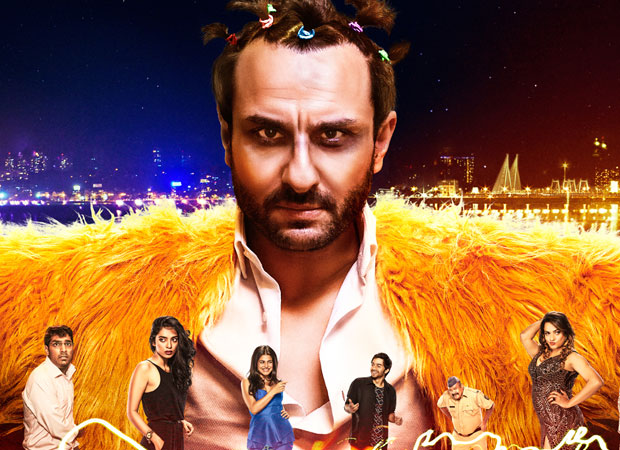 The promo of Kaalakaandi has pretty much established that this is a quirky film in the offing. No wonder, you expect the same from the soundtrack as well which has music by Sameer Uddin and lyrics by Anvita Dutt.

Guest lyricist Akshay Verma also comes behind the mike for 'Swagpur Ka Chaudhary' which has a peppy sound to it and actually gets into a tripping mood. With a Haryanvi twang to it, this one is promotional track which could well be playing in the background during the film's narrative. With a certain zing to it, 'Swagpur Ka Chaudhary' actually turns out to be a decent hear.

Folk track 'Kaala Doreya' gets a contemporary treatment with Neha Bhasin as the lead singer and rapper Raxstar chipping in as well. The song could well have been a little more impactful had it not been so much over exposed. However the fact remains that both the song as a whole or its bits and pieces have been heard in numerous films and hence there is no real novelty factor.

Lyricist Anvita Dutt pens the remaining three tracks with 'Jive With Me' as her first offering. Abhishek Nailwal is the lead singer for this dance number that has a 60s feel to it and has is set in a Western mode. The manner in which Abhishek sings this one, he reminds of Shaan's rendition, more so since the film features Saif Ali Khan and hence one relates this voice with the actor.

Title song 'Kaalakaandi' comes in next and for this guest composer and singer Shashwat Sachdev brings together many other vocalists in the form of Vivek Hariharan, Romy and Arun Kamath. Yet another situational piece, one wonders if and how it would be placed in the film's narrative since it is hardly the kind that one can imagine any of the actors lip synching to.

Abhishek Nailwal also croons 'Aa Bhi Jaa' where he has Vishal Dadlani as his accompanying partner. Pretty much continuing from where 'Kaalakaandi' left, this one too has a situational appeal to it and doesn't really fit into the quintessential Bollywood soundtrack mode.

The music of Kaalakaandi is different though not necessarily entertaining. Its recall value would be directly proportional to the run that the film has in theaters.