Last Updated 17.05.2022 | 8:45 AM IST
feedback language
follow us on
Bollywood Hungama » Movies » Movie Reviews » Blade Runner 2049 (English) Movie Review: Blade Runner 2049 turns out to be an engrossing mix of stellar visuals coupled with a riveting background score that keeps the viewers glued to their seats.

Blade Runner 2049 (English) Movie Review: Blade Runner 2049 turns out to be an engrossing mix of stellar visuals coupled with a riveting background score that keeps the viewers glued to their seats. 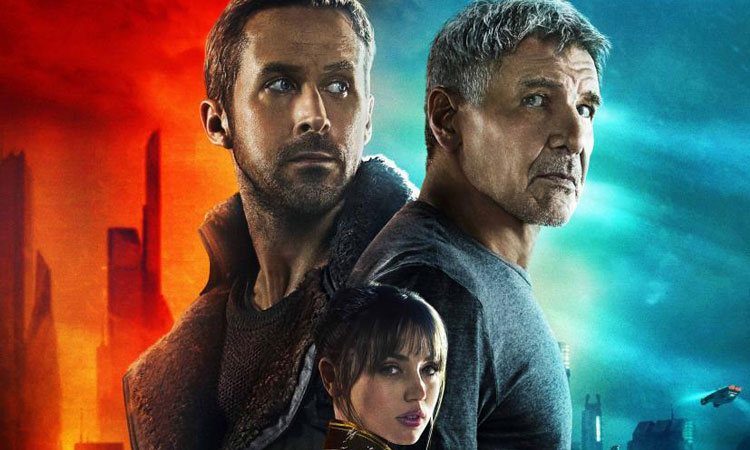 Over the recent couple of months or rather years, we have been seeing a rise in the number of old classics being remade with the latest technology. But are these recreations worth their while or are they just an eye candy is a pertinent question. This week we see the release of yet another film, BLADE RUNNER 2049, from the days gone by getting new life breathed into it. But will this recreation work at the box office or will it like so many others before it, be lost is the question of the hour.

The film starts off by setting the premise by depicting a world in 2049 that has been ravaged by humanity. After the development of humanoid artificial intelligence that has begun to become sentient a new generation of human- robot hybrids are developed which follow commands. From them a certain segment is categorized as Blade Runners whose sole purpose is to hunt down and 'retire’ the older models. The story of BLADE RUNNER follows a young blade runner's discovery of a long-buried secret leads him to track down former blade runner Rick Deckard, who's been missing for thirty years. Will he uncover the truth behind his being or will he become yet another scrapped bot in an endless war is what makes the rest of the film.

Like most post-apocalyptic films, BLADE RUNNER 2049 too relies heavily on visuals that convey the desperate fate humanity finds itself in. However, what works for the film apart from the visuals is a marvellous sound track that coupled together transports the viewer into the world of 2049. Though a bit slow in parts, the director of the film Denis Villeneuve does manage to keep you in your seat with well-timed action sequences. Besides this, Villeneuve also manages to give each character that is introduced, a plausible backstory while at the same time taking the film forward without spending precious minutes on explanations. Interestingly, despite being a bleak science- fiction film, BLADE RUNNER 2049 turns out to be quite unlike other films that have focused on racking up the body count. Instead the film focusses more on the story of the characters while simultaneously margining actions, drama, and emotion together all set against a grim backdrop.

Since the original BLADE RUNNER developed by Ridley Scott was a masterpiece for its time, the biggest question that comes to mind is will Denis Villeneuve, despite his past performance behind the camera in films like SICARIO, be able to pull off Scott’s dystopian world? However, once the film starts, these doubts vanish like the foliage that is all but gone. In fact Villeneuve's vision of BLADE RUNNER 2049 is startlingly well made. Though, here credit needs to be awarded to the brilliant director of photography Roger Deakins, who has done a stellar job of bringing to life Scott’s vision. However, it wasn't only Villeneuve and Deakins combination that makes BLADE RUNNER riveting. Adding a thrilling suspense element is the background score developed by the musical genius Hans Zimmer. From the first chord itself, the viewer is unsettled by the score that coupled with the visuals goes a long way in defining the film. Like the title track in WONDER WOMAN and for that matter Zimmer’s previous score for DUNKIRK, the audiences are kept on the edge of their seats.

Coming to the performances, the entire cast seems to have put their best foot forward. Starting with Ryan Gosling, on whose character the entire film revolves, has done a brilliant job of portraying agent ‘K’. His lacklustre expressions towards conventional environments that would elicit a response go a long way in setting the baseline for a character that is expected to be detached and emotionless. From there, Gosling does well as he takes viewers on a journey of discovery as he begins to feel emotions. Similarly, Harrison Ford who has over the years featured on celluloid as iconic characters be it Han Solo or Indiana Jones, has done some of his best work in this film. In fact Ford’s performance as Deckard, in the small yet vital role in BLADE RUNNER 2049, can easily be termed as one of his best. Doing equally good job is the villainous duo of Jared Leto as Neander Wallace, the evil head of a corporation that heads the new world order, and Sylvia Hoeks as Neander’s hit-woman Luv. While Leto doesn’t have much screen time, his presence is felt through Hoeks as she goes about her business executing orders from her superior. Also doing an impressive job is Ana de Armas as Joi, K's artificial girlfriend. Though her role doesn’t appear to be much, while at the same time reminding viewers of Alicia Vikander in EX MACHINA, she does a great job of grounding agent K and giving him a side that makes him human.

On the whole, while director Denis Villeneuve will certainly be getting a standing ovation for BLADE RUNNER 2049, it must be noted that unlike most others who would have preferred on making a reboot, Villeneuve picks up where the previous film left off with aplomb. Call it a science – fiction or character based film, both of which will still hold true, the film turns out to be an engrossing mix of stellar visuals coupled with a riveting background score that keeps the viewers glued to their seats. However, given the limited release that BLADE RUNNER 2049 gets in India, the film won’t be able to post impressive numbers at the box office.