Dhadak duo Janhvi Kapoor and Ishaan Khatter are the newbies of the tinsel town. By pulling each other's legs to being adorable onscreen, the actors prove that they are pretty close buddies. Not only that, the actors are even gym buddies and often try to work out together whenever possible. Recently, while they were in sweating it out in the gym, they even took the 'Zingaat' challenge and gave it a new twist. 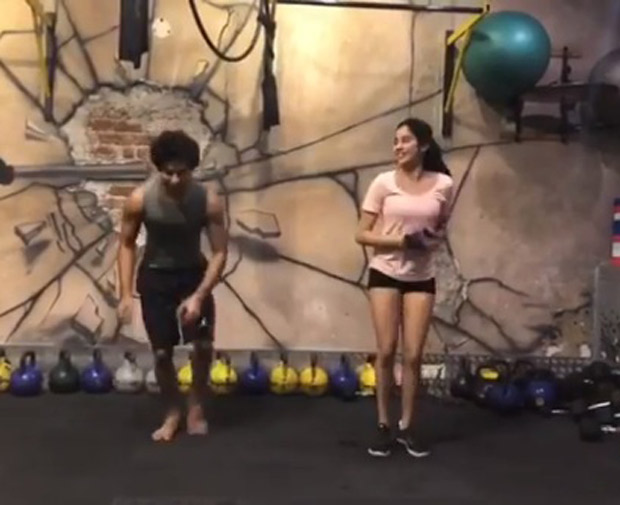 Janhvi Kapoor shared a video on Friday with Ishaan Khatter while they did different workout routines. While doing so, the 'Zingaat' song played in the background. As the film is all set to premiere on TV, the duo is hyped and pretty excited about the same. Sharing the challenge video, she captioned it, "Just when you thought you got rid of us..... we’re back!!! ????????????????Thanks #ZeeCinema for the Challenge and I nominate @shashankkhaitan to take up the #ZingaatWorkout challenge with us!."

Recently, it was Sunny Leone and her husband Daniel Webber who took the 'Zingaat' challenge. But, here's the twist. They performed the challenge at Madame Tussauds in Delhi where Sunny's wax figure was unveiled. She and her crew members made sure to celebrate the day with the song peppy dance number.

Janhvi Kapoor, on the work front, has already signed her next film Takht which will be helmed by Karan Johar. It stars Ranveer Singh, Vicky Kaushal, Alia Bhatt, Kareena Kapoor Khan, Anil Kapoor and Bhumi Pednekar. The film is set for 2020 release. Ishaan Khatter is currently going through scripts for his next film.

Just when you thought you got rid of us..... we’re back!!! ????????????????Thanks #ZeeCinema for the Challenge and I nominate @shashankkhaitan to take up the #ZingaatWorkout challenge with us! #DhadakOn30Sep, 9 PM on @zeecinema