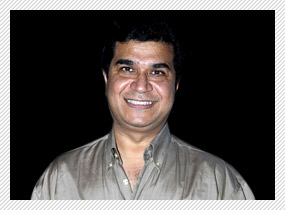 His last major movie was action-drama Baabarr which had fetched some good critical appreciation for itself. Then last year he saw a release in the form of Enemmy. Continuing to dabble in the action-drama-thriller genre, filmmaker Asshu Trikha, who had started his career with Arjun Rampal starrer Deewanapan more than a decade back, returns with Koyelaanchal. What's more, he also reunites with his Deewanapan villain Vinod Khanna who plays a coal mafia don this time around.

Generally, releases of your films are spaced out. However, you started Koyelaanchal soon after the release of Enemmy. How?
It is just fate since Koyelaanchal was actually written way back in 2009. It was a complete bound script with dialogues and stuff. It is just fate that Enemmy started earlier. The moment it got over, I started working on Koyelaanchal and everything fell into place. In fact the earlier plan was to begin in October last year but then Suniel (Shetty) had some commitments so we pushed it ahead by a month and started in November. Otherwise we may have finished it even quicker. Even though we shot in North India during winters when the days are short, we finished the film in 41-42 days since the actors were prepared.

Was it difficult to assemble these actors though, especially Suniel? After all, your Enemmy together didn't work.
We all were very disappointed by the way the film was received or written about. Unfortunately for me, not too many people got to see the film. Fortunately though, all those who saw the film liked it and said that it's a good film. The actors had faith in me and they stood by me. They came together and said that we should all do another film and make sure that it does really well.

You are also reuniting with Vinod Khanna after more than a decade.
He is extremely conscious of what work is he doing. It's different that with Salman he is regularly doing films (Dabangg, Dabangg 2) but otherwise he is very picky. He is very selective as he is now a full time politician as well. He is again someone who has stood by me and given me confidence about my work. After I wrote the character of this coal mafia don, I thought that there cannot be a better choice than Vinod Khanna. His films like Mera Gaon Mera Desh and Dayavan are still etched in my memory. His body of work is respected immensely and he has done both positive and negative roles.

Apparently, he has a Godfather kind of a characterization in the film.
(Smiles) There is a story behind that. I remember going to his house and narrating him the script. He heard it in good detail and then we proceeded for lunch. His wife joined us and asked if he was playing a negative role. This is when he just turned around and said -'No I am playing Godfather'. See, he is a kind of actor who instills respect into a character by default. That man has ample screen presence to be actually looked at as a royal. That by itself is 60% of my work done. His approach to films is like no one else. He takes care of every little nuisance. He worked hard on the sheer look of the character.

On the other hand Suniel Shetty isn't flexing his muscles, right?
For Suniel, it is not so simple to play a common man. Let me narrate a scene from the film where he and Vinod Khanna are together and a man comes and falls on the feet of the latter to ask for forgiveness. This is when the right hand man of Vinod Khanna drags him and slit his throat. Suniel played it all very differently by throwing up instead of showing his fiery eyes. He has gone ahead and changes his 20 year old image with this one film. He has acted so well to make the common man characterization come across really simple. I know for sure though that it was very challenging for him.

How about the other man on the scene, Vipinno, who plays a villain here?
We were in touch during Baabarr as well. So when this part came up in Koyelaanchal, I asked him if he would be interested. The moment he confirmed that he wanted to do it, I put him through a rigorous grind and workshop with a theatre actor who worked with him day and night to get his perception and portrayal of the character right. He had the dialogue in his mind like a muscle reflex. He was so completely prepared that he did everything. Moreover, he is also extremely well built. He is brilliant in the film.

Do ladies have a part to play in this male dominated affair?
For the part of a bold prostitute that has been played by debutant Roopali, I might have auditioned around 700 girls. It boiled down to three girls and everyone's preferred choice was one or the other. I put my money on Roopali though. She is not a glam doll and comes from an art and theater academy in Nagpur, which is practically equivalent to NSD. As for Suniel Shetty's wife, Purva Parag stepped in. She plays a very strong woman who acts as inspiration for Suniel Shetty's character. You may remember her as Ranbir Kapoor's mother in Barfi! .

Now that the film is releasing, do you feel better than any of your releases before?
Honestly, I have a good gut feeling for this product, so I am hoping that more people get to see the film. That should be a start indeed because I am sure word of mouth would be very strong for Koyelaanchal.