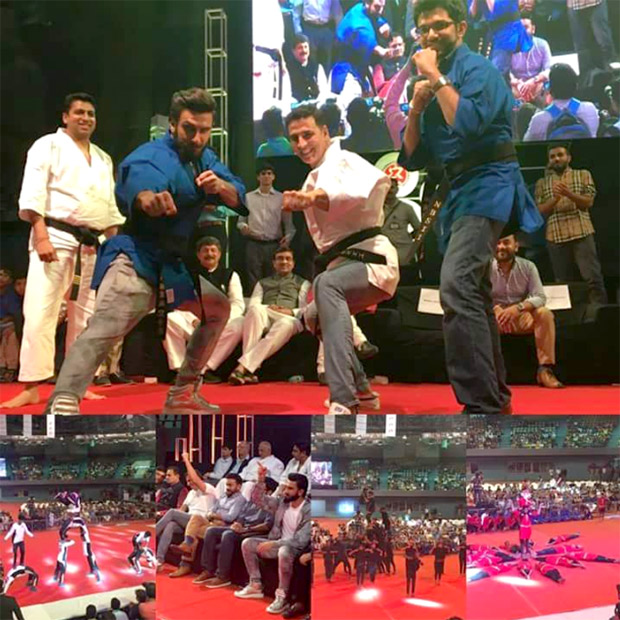 In a rare occasion of sorts, when two superstars come together for not just a party but for a good cause, it ought to make headlines. Considering the way Akshay Kumar has been striving for the past couple of years about the Kudo championship in a bid to promote self-defense, this time around too the said event turned out to be a huge success. Guess who was the chief guest this time? It was none other than Ranveer Singh.

Ranveer Singh, who was recently seen at the trailer launch of Befikre, was spotted at the tournament and Akshay Kumar announced about the same on Twitter. Accompanying the Bollywood duo was Yuva Sena leader Aaditya Thackeray. In fact, Akshay took to Twitter to share the news and give a glimpse of the Kudo championship as he posted a collage of the happenings of the tournament with caption saying, “Happy to see keys of success, discipline & hardwork in abundance at the VIII Akshay Kumar Kudo Championship,2016! Thank u Ranveer & Aaditya”

On the other hand, Ranveer Singh too took to Twitter to talk about the event.

Thank you for having me, Sir! Wonderful to witness such an honourable event ?? https://t.co/haXCwqIlvy

Interestingly, Akshay Kumar joined hands with Youth icon Aaditya Thackeray for setting up self-defense training institutes across the city and country for women in a bid to curb the crime rate against women. Also, Aaditya was a part of the event and he too took to Twitter and thanked Akshay Kumar for the same.

Thank you @akshaykumar ji fr making me a part of your brilliant selfless support to Kudo. @RanveerOfficial thank you fr being a part of this https://t.co/ZMO1rE4NtQ

On the Bollywood front, Akshay Kumar who was last seen in Rustom, is on a film signing spree and will be seen in a couple of forthcoming films like Jolly LLB 2, Crack and Toilet - Ek Prem Katha. On the other hand, Ranveer Singh is gearing up for the promotions of Befikre, after which he’ll start with Sanjay Leela Bhansali’s Padmavati.