Eid 2019Shah Rukh Khan had a surprise guest during Eid 2019 celebration on Wednesday. The actor came on the porch of his balcony at Mannat to greet the fans who were waiting for hours to catch a glimpse of him. The actor was seen with his son AbRam Khan. But, a special guest accompanied him and it was American veteran host, David Letterman. David Letterman also waved along with Shah Rukh Khan as he witnessed the hysteria. 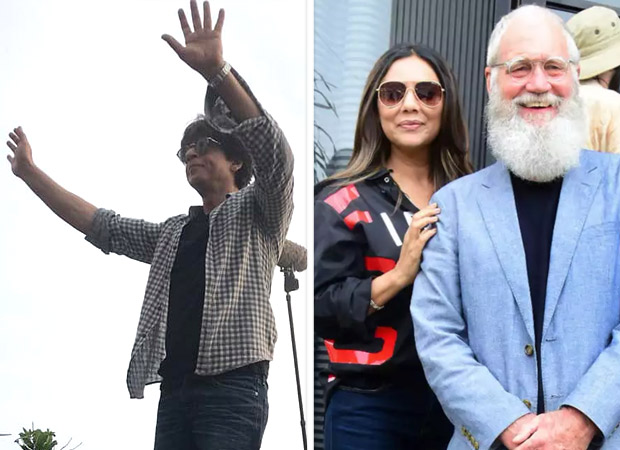 On Thursday, Shah Rukh Khan was seen shooting in the city where hundreds of fans gathered outside to catch a glimpse of the actor. He came out, stood up on his car roof and waved at everyone before he left. As SRK had taped My Next Guest Needs No Introduction in New York last month, they are currently shooting some portions in Mumbai. David's Mumbai trip was pre-planned to witness his life in Mumbai. The actor was seen taking a stroll at Bandstand in Bandra with Letterman where he shook hands with bystanders and greeted some fans on his car roof before leaving the venue. All this was being taped as the cameramen trailed them.

David Letterman has also shot at Mannat to see Shah Rukh Khan's life at home with his family. Then, on Thursday afternoon, he filmed at Gauri Khan's design store, Gauri Khan Designs, in Mumbai where a couple of portions were filmed. Post the shoot, the host and Gauri posed for the paparazzi as Letterman witnessed the stardom of SRK in real time.

A dream come true for all the fans as SRK greets them ❤️
The most loved superstar of the world ???? ✨ pic.twitter.com/Ea6QGXw02v

FAN love at its best ❤️
King Khan waving to all the FANs as he is surrounded by the fans. The ultimate experience for all the people who got to witness this live. pic.twitter.com/BAYeHMpFUq

EXCLUSIVE: Jackie Shroff reveals how he has…