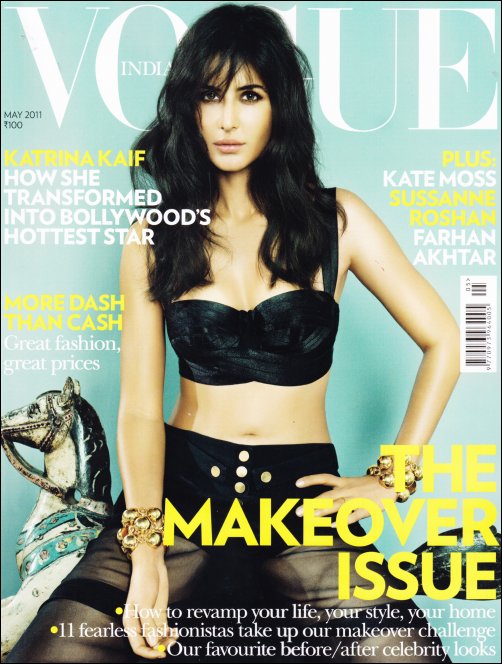 She has enthralled the audience with her rhythmic gyrations to the hit track 'Sheila Ki Jawani', and now she is setting the temperature gauges ringing this summer with her latest magazine cover. She is none other than Katrina Kaif.

The damsel sizzles in the latest edition of Vogue, draped in shorts with a long Givenchy chiffon skirt by Riccardo Tisci and a bodice Bordelle wrap bra, accessorised with Vionette plain gold bracelets and hiding treasure ring by Gisele Ganne, Katrina simply sets the mag on fire.

With an article that talks about the Katrina's reinvention into the Bollywood bombshell, she gets chatty about what she was and her eventual rise to the pinnacle of acting. "I was never the next big thing. It was more a sort of okay she was good in this film, danced better in this one and showed her range in this", says Kat about initial days in Bollywood.

Further she even talks about her modelling career before her big break with Kaizad Gustad's Boom, "I would go to the ad agencies and get called for auditions. I got most of the ads, except for one where I had to play kabbadi," quips the leggy damsel. Later she even talks about her becoming the hottest thing in Bollywood, so catch all this and much more in the latest issue of Vogue.