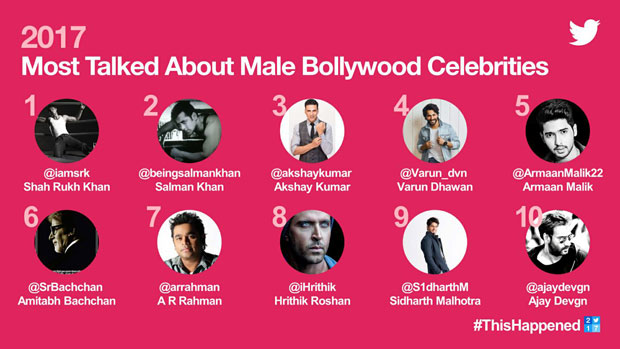 Social media has become a medium for well-known personalities to connect with their fans. The micro-blogging site Twitter has today become an integral part of an overall film experience for fans with the best of film stars, movies, and conversations on the platform. Users today have access to the biggest of stars and films through Twitter - with celebrities using the platform to connect and innovatively engage with audiences across the globe.

Many bigwigs like Shah Rukh Khan, Salman Khan, Aamir Khan amongst others use Twitter as a part of their daily lives. Well, this Shah Rukh Khan became the most talked about celebrity on Twitter which was followed by Salman Khan in the second place. Shah Rukh Khan had two releases this year- Raees which did well at the box office and Jab Harry Met Sejal which bombed. But, he did secure the first position. Once again, SRK beat Salman on Twitter after Raees was the top trending hashtag followed by Tiger Zinda Hai.

The third position is bagged by Akshay Kumar followed by Varun Dhawan on the fourth position, Armaan Malik came in fifth. The other actors in the list included Amitabh Bachchan, A R Rahman, Hrithik Roshan, Sidharth Malhotra and Ajay Devgn.