Last Updated 15.10.2021 | 9:48 PM IST
feedback language
follow us on
Bollywood Hungama » News » Bollywood Features News » “Together we were, we are and we’ll be the resistance” – says Tokyo played by Úrsula Corberó as she announces Money Heist Part 5: Volume 2 arriving in December

Netflix dropped Part. 1 of the final season of Spanish drama Money Heist earlier this month. The season ended on a pretty dangerous note claiming one of the original star cast. After the death of one of our most iconic characters, Tokio, the gang was left in despair, broken. But even if they are broken into a thousand pieces, the Resistance will always come back as one. 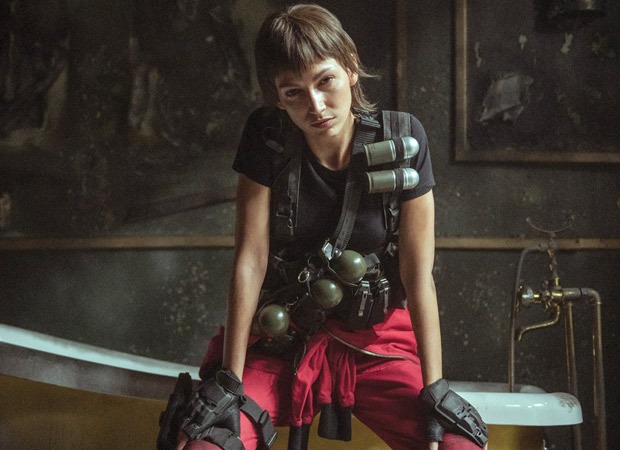 As per a Japanese tradition, Kintsugi: an art that consists of using liquid gold to put together broken pieces and make them even stronger, a Kintsugi artist puts together the broken pieces of a Dali mask. Nothing is truly broken. Tokio wants the gang to remember what doesn't kill you makes you stronger and their strength lies in being courageous and united. Gold has united them once and it will not separate them ever again because every time they feel broken, they come back stronger.

For Professor, Denver, Helsinki, Palermo, Bogotá, Rio, Oslo, Moscow, Berlin, and Nairobi, this special video is a final goodbye from Tokio, and a leap of hope for the gang. They will always be the Resistance. In a video, Tokio narrates, "Nothing is truly broken. Dear Professor, Denver, Helsinki, Bogotá, Palermo, Rio...My Rio. I know you are completed screwed, broken. So am I. In a thousand pieces. Because they say what doesn't kill you makes you stronger. How strong do you become with what actually kills you? Remember Oslo, Moscow, Berlin, Nairobi, gold has united us once and it will never, no matter what happens, separate us again. Because every time they break us, we will come back even stronger. Never forget, together we were, we are and we'll be the resistance."

Brace yourselves for Money Heist Part 5: Volume 2 releasing on December 3 - only on Netflix!