Speaking about the look, Srishti Jain revealed, "We were shooting for a godbharai sequence for Hamariwali Good News and with the episode airing during Durga Puja, it was decided that we will be in Bengali avatars for the sequence. In fact, Juhi ji and I also danced for this special sequence and it was really fun. However, it was my outfit that grabbed everyone's attention on the set. I wore an authentic white and red Bengali saree and it was draped in their style as well. I had matching jewellery and minimalistic makeup, but the whole get up looked elegant and enchanting. Though it took us a long time to get the look right and for me to get into the get-up, I feel it was worth it and I love my look. I can't wait to see how the audience will react, especially with my look changing in the second episode of Hamariwali Good News itself." 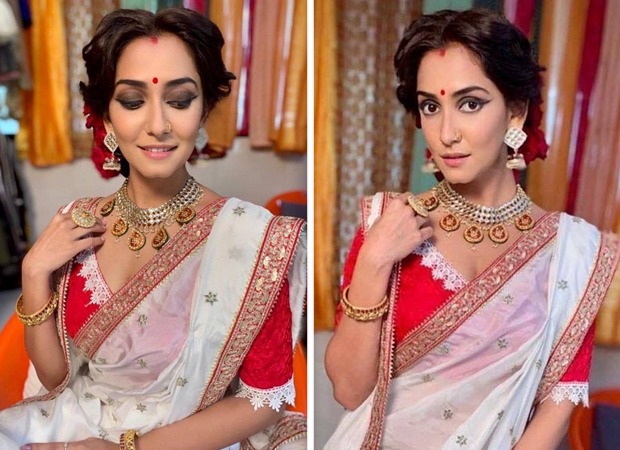 The show presents a heart-warming story that captures the essence of the ever-evolving dynamics of the saas-bahu relationship in Indian society. A relationship, often portrayed as typically adversarial, political and manipulative especially on Indian television, will now make way for an equation that is based on trust, hope, a friendship that has the two going out on a limb for each other in Hamariwali Good News. In fact, the show presents a most unique role reversal between the daughter-in-law Navya and her mother-in-law Renuka to give their family the much awaited ‘Good News’.

Set in Agra, the show features the Tiwari parivaar who like most families, are grappling with the quest for the quintessential 'Good News' of a tiny tot who'll fill up their lives with joy. Only this time around, it is the Saas who rather than pressurising or berating her bahu for not being able to conceive, will go the extra mile, brush aside considerations such as age and 'Log Kya Kahenge' by conceiving a baby with her husband to bring the 'Good News' that they collectively await. After all, who better than your own family to back you up when your chips are down and there seems to be no hope! The journey of this unique Saas-Bahu relationship and the manner in which it beautifully deepens in the face of this role reversal forms the crux of Hamariwali Good News.

The show features versatile television actress Srishti Jain as Navya Tiwari, a confident and young 23-year-old married girl who teaches kindergarten kids. While she wishes to have children of her own, Navya does not want to rush into this next phase of her life as she understands that raising kids comes with incredible responsibility and wishes to do so when the time is right. Popular TV actress Juhi Parmar slips into the shoes of Renuka, the mother in law who is the lifeline of the Tiwari family and manages the house the way only she can! She is a strong-headed and God-fearing person who is also an active member of a ‘Kirtan Mandli’ consisting of the neighbourhood women.

Neha Kakkar and Himesh Reshammiya get…