Remember when Priyanka Chopra took the world on a ride with her golden saree in the upbeat and funky song 'Desi Girl' turning into an aspirational icon for every girl? Taking the legacy forward, Kiara Advani is rocking the golden look in her recent 'Heelein Toot Gayi' emerging as the new 'Desi Girl' in town. 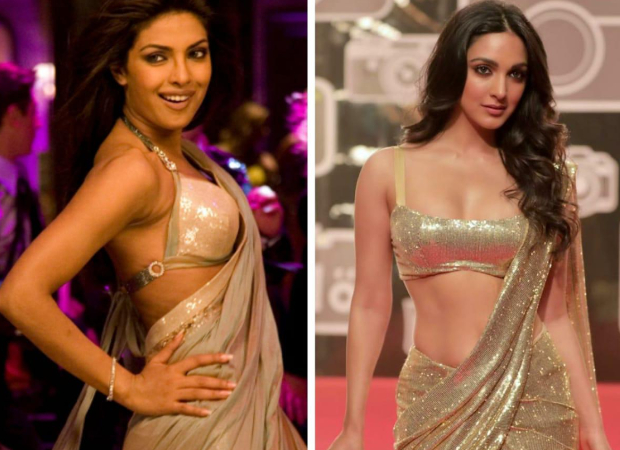 Kiara Advani's ravishing beauty is taking over the glam world as the actress offers a plethora of fashionable choices with every attire. The latest look in a golden sequin saree teamed with a similar blouse created a storm on social media, drawing parallels to the craze Priyanka Chopra created with her blingy look in Dostana with her saree clad act. Looking sexy and desirable, Priyanka Chopra turned into every guy's fantasy and every girl's inspiration back in 2008.

Cut to 2020, Kiara Advani's hot and stunning avatar is setting the screen on fire with her fans touting the young actress as the latest Desi Girl of B-town. Kiara Advani is one of the leading ladies of Bollywood today with every performance amassing more and more praises and creating a fanbase stronger than ever.

Impressing the audience with Kabir Singh and then continuing to rule over the masses with Good Newwz and Guilty, Kiara Advani became the talk of the town with her glamorous style in Laxmmi.

Now with the upcoming Indoo Ki Jawani, Kiara Advani has turned into the most looked upto fashion icon in the contemporary times, also being labelled as the new 'Desi Girl'.

Apart from Indoo Ki Jawani, Kiara Advani will be next seen in Bhool Bhulaiyaa and Shershaah, along with Jug Jugg Jeeyo, the shooting for which began last month.