Priyanka Chopra Jonas is a global superstar. She has done some mind-blowing movies over the years and made some smashing red carpet appearances. Priyanka Chopra is living the life in the West, married to American Pop star Nick Jonas. 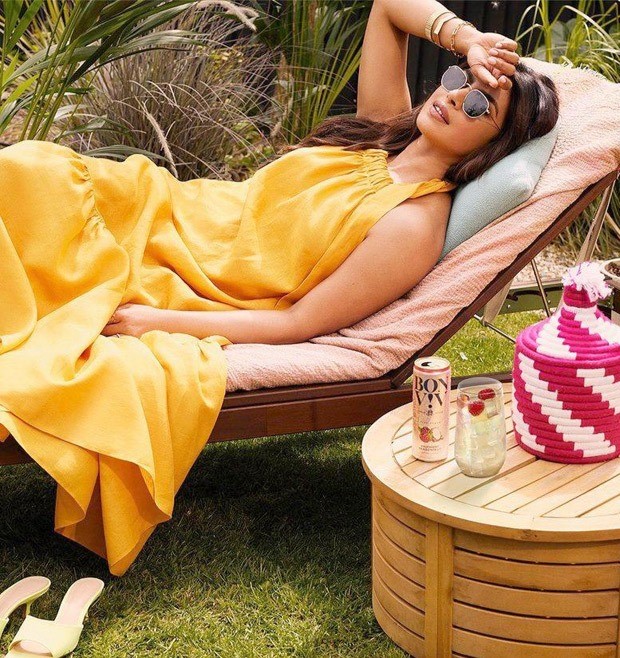 Priyanka Chopra made a splash on our Instagram feeds with her beautiful snaps chilling on a beach chair. She is seen dressed in a mustard yellow halter neck dress with fresh makeup with matte nude lips and beach waves in her hair. She accessorised her look with stacked up gold bracelets. She completed her look with black tinted sunglasses. She looked radiant as ever sun bathing. She also talks about her newest Bon Viv Spiked Seltzer which is her favourite drink with Dragonfruit, Gin and Raspberry.

Priyanka completed shooting for her upcoming film Text for you starring Sam Heughan, Celine Dion, Russel Tovey, Steve Oram and Omid Djalilli.  She has also been working on Amazon Prime's spy series Citadel. She is currently shooting for the series and regularly updates her Instagram army with snaps from sets. Other projects include a rom com with Mindy Kaling, a biopic on Ma Anand Sheela, Matrix 4, and an unscripted Amazon series tentatively called Sangeet which she and her husband Nick Jonas will produce. She also recently attended the Wimbledon game as a Ralph Lauren invitee. She also celebrated her birthday sans husband Nick Jonas. Nick and Priyanka also completed 3 years of knowing and dating each other on 20th July.

Also Read: Priyanka Chopra Jonas posts snaps with her best friends making the best use of the London summer