The makers of the crazy project Liger (Saala Crossbreed) starring Vijay Deverakonda and directed by Puri Jagannadh announced to kick-start the musical promotions. While the promo of the first single 'Akdi Pakdi' will be out on July 8th, the song will be out on the 11th. 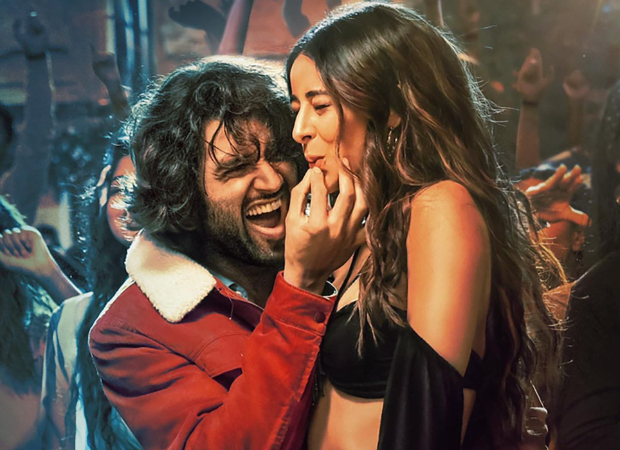 The announcement poster sees Vijay Deverakonda and actress Ananya Pandey in a cheerful mood. The former helps the latter to whistle with his hand. It’s a party song that’s going to be a peppy one. While Vijay appears in a red blazer, Ananya looks strikingly elegant and glamorous in a black outfit. The song was shot on a pub set. Lijo George-Dj Chetas scored the song, while hooking is by Sunil Kashyap and Azeem Dayani is the music supervisor. Dev Negi, Pawni Pandey, and Lijo George crooned the Hindi version of the song for which lyrics were penned by Mohsin Shaikh and Azeem Dayani.

In Telugu, Anurag Kulkarni and Ramya Behara together lent vocals, while Bhaskarabhatla Ravikumar provided the lyrics. Written by Sagar, the Tamil version of the song was sung by Sagar and Vaishnavi Kovvuri. Vishnu Vardhan and Syama are the singers of Malayalam, while the lyrics are by Siju Thuravoor. Santosh Venky and Sangeetha Ravichandranath crooned the Kannada version of the song written by Varadaraj Chikkaballapura. Sagar is the south music administrator.

Vijay Deverakonda recently stunned one and all by going bold and posing almost naked. The actor makes a statement with the poster that he goes all-out to promote his movies. Liger is certainly one of the most awaited films in India and the team is keeping the expectations bar further high with every promotional stuff.

In association with Puri connects, the film is being produced jointly by Dharma Productions. Puri Jagannadh, Charmme Kaur, Karan Johar, and Apoorva Mehta together are bankrolling the film on a grand scale. Vishnu Sarma is the cinematographer, while Kecha from Thailand is the stunt director. Being made in Hindi, Telugu, Tamil, Kannada, and Malayalam languages, the Pan India Movie is scheduled for release in theatres worldwide on 25th August 2022.