Last Updated 06.06.2020 | 6:10 PM IST
feedback language
follow us on
Home » News » Bollywood Features News » Bollywood News Koffee With Karan 6: From Karan Johar suffering a mid-life crisis to having a crush on an ex-student, Tiger Shroff, Ananya Pandey and Tara Sutaria bear it all

The sixth season of the popular chat show Koffee With Karan has been many things, from being an unbridled laughter riot to a rather revelatory episode the show has seen many twists and turns. Now after featuring a host of celebrities, the latest episode features the new students or rather the cast of Student of the Year 2, with Tiger Shroff, Ananya Pandey and Tara Sutaria taking the couch. But will this trio of one established actor, one star kid making her debut and a total industry outsider stepping foot in the world of films be as entertaining. Well, let us tell you that the latest episode has quite literally everything, with the host Karan Johar talking about his midlife crisis to one of the new students having a crush on an ex-student. 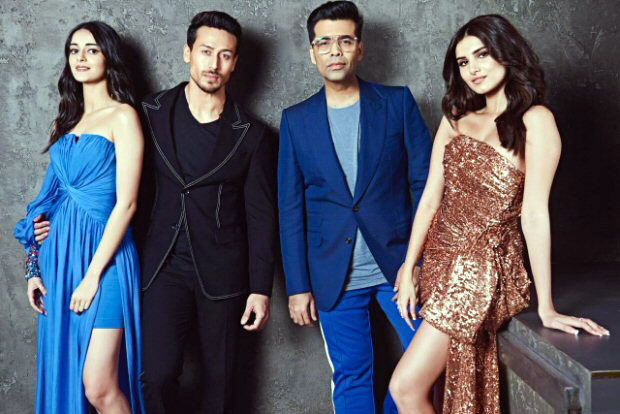 Like always the latest episode of Koffee With Karan began with Karan Johar welcoming his guests. Starting with Tiger Shroff, who incidentally featured earlier with his father Jackie Shroff and soon introduced the two stunning beauties Ananya Pandey and Tara Sutaria. It was an emotional journey of sorts for Karan who revealed that he made Student of the Year to escape his midlife crisis. Revealing the same Karan said, “I was in my 40s and was going through a midlife crisis and wanted to feel young. That’s why I made SOTY. Though the film did not break any cinematic boundaries, I did have a lot of making it and introduced new talents in the form of Varun Dhawan, Alia Bhatt and Sidharth Malhotra.” But it wasn’t only Karan doing the revelations, in fact, Tiger Shroff who is fresh from the success of his last release Baaghi 2 and is currently working on his next venture with Hrithik Roshan decided to impart some words of wisdom offered to him by Hrithik. Talking about that Tiger added, “The power of box office certainly means a lot to this generation and today’s filmmakers. Now with that success I feel I can walk with my chest flared up a bit more. But one thing that Hrithik Sir told me is something that I really hold dear, he said, ‘A star has to work twice as hard as an actor’.”

From here the episode lightened up with Ananya Pandey and Tara Sutaria stealing the limelight. In fact, the two girls seems completely at ease and were more than ready for what came their way. In fact, Ananya revealed that not too long ago she, Suhana and Shanaya used to watch Koffee With Karan and even played the rapid-fire with each other. Though the trio were enjoying themselves, Ananya opened up about feeling like she doesn’t deserve anything, “I don’t think I deserve the break I got, I am just lucky my dad was an actor. There are so many people out there who are more talented than me, but yeah I just feel lucky”. From here the conversation moved onto Tiger being two faced, with Karan talking about reports he heard that Tiger isn’t the quintessential mama’s boy with friends. Responding to the same Tiger said, “With my boys I am my father’s son and when in public I am my mother’s son… so let’s leave it at that.”

Though it was interesting to see Tiger admit to his wild side, Ananya went on to talk about how Tara behaves like a sort of grammar nazi, while Tiger revealed that the girls bitched about each other to their director Punit Malhotra. However, the girls defended themselves saying that they (Tiger and Punit) always wanted them to fight. Interestingly, another little known fact popped out on the show, with Punit revealing that once Ananya and Tara had a little too much to drink which ended up with Ananya proposing and Tara accepting!

Besides this revelation there were others too like for instance Tiger Shroff being unable to sleep alone even today, that Ananya never referred to Punit by his name on sets and instead always used a cuss word to address him, and that Tara Sutaria had a crush on an ex-student.

But the episode was far from over with the last segment being the rapid fire session and the buzzer round. In this segment, Ananya admitted that she was the biggest flirt while Tara, on the other hand, would be the one leading guys on without even knowing it. All in all, the three new students had a blast on the show and were entertaining AF.

Also Read: Koffee With Karan 6 – Tiger Shroff CONFESSES that he can’t sleep alone and here’s why!