Janhvi Kapoor shared photos from a recent party she attended with her sister Khushi Kapoor. On Saturday, the star turned to Instagram to disclose that her rumoured ex-boyfriend Akshat Rajan had joined them. At the celebration, he and the Kapoor sisters appeared to be having a great time. 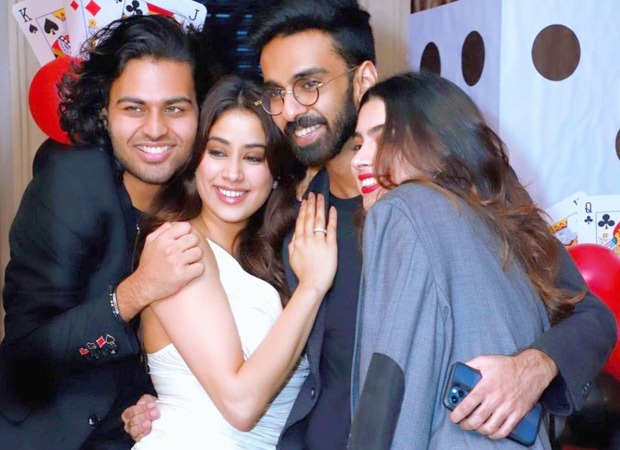 Janhvi dressed up in a white strappy dress for the occasion, while Khushi wore a black shirt and slacks with a grey oversized blazer. As they smiled for the camera in the footage, Akshat lavished Janhvi with embraces and kisses. They struck various positions. Khushi, her sister, soon joined them.

Janhvi and Khushi, together with their pals, posed in front of a balloon arrangement with big cutouts of the King, Queen, and Jack playing cards. A set of playing dice could also be seen behind them. The post was captioned "fam" by Janhvi.

On Thursday, Janhvi provided a sneak peek of her ensemble. She shared a series of photos she took after getting ready for the night. She posed for the camera several times and posted photos to Instagram with the comment "vanilla swirlie."

Janhvi also shared a sweet photo with Akshat earlier this week to wish him a happy birthday.  “Happy birthday to the world's best human I love you,” she said.

Janhvi's most recent film appearance was in Roohi, in which she played a possessed bride. Rajkummar Rao and Varun Sharma also acted in the film. Earlier this year, she completed the filming of Good Luck Jerry. Despite the fact that Janhvi has Dostana 2 in the works, filming for both films has yet to begin.

While Dostana 2 had finished filming before the pandemic, it has been put on hold when Dharma Productions declared that the film will be recast.

Meanwhile, Khushi is set to make her acting debut in the near future. Despite the fact that her name has been linked to a number of projects, neither she nor her father, producer Boney Kapoor, have acknowledged the news.