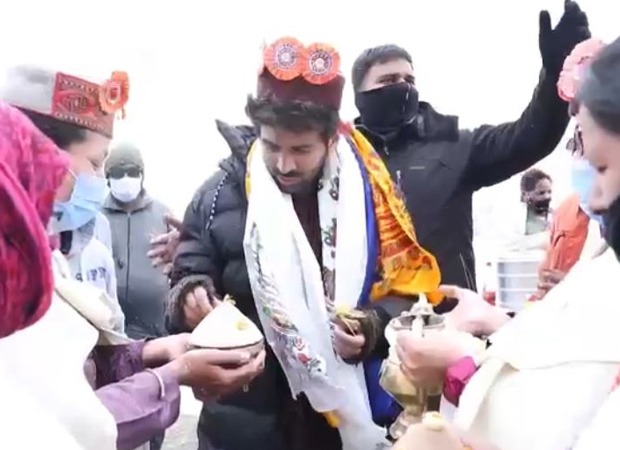 Just prior to the commencement of the shoot, the natives flocked with the 'Pahadi' cap and shawl to welcome the actor. They also conducted a small pooja on the sets to mark the auspicious beginning of the shoot and blessed Kartik for the success of his films and career.  An utterly blissful sight to witness the fans pour their heart out for their favourite actor in such overwhelming manner. Kartik clicked pictures with the natives and thanked them for their heartwarming gesture.

Known to have a huge fan following across the country, we have seen Kartik being mobbed at different locations of his shoots and promotions. Having high impact on his fans Kartik always enjoys their support and tries to give it back either through sweet gestures or  through social media sneak peaks into his life.

Recently, he uploaded a quirky video to reveals his new hairdo. He posted a video on social media where he’s seen amidst the snow and the famous Game of Thrones music playing in the background. And then in the most dramatic way he revealed his hairdo which is his OG hairstyle that has always created a rage among boys. The post created an uproar on social media and soon went viral for all the right reasons.

Foraying into different genres Kartik will be seen in films like Dhamaka, Bhool Bhulaiyaa 2, Dostana 2 through the year, entertaining his fans.