Diana Penty shot to fame with Cocktail. She has since then been an absolute eye candy with her chic fashion choices to her red carpet statements. Recently, she was vacationing in Hungary. 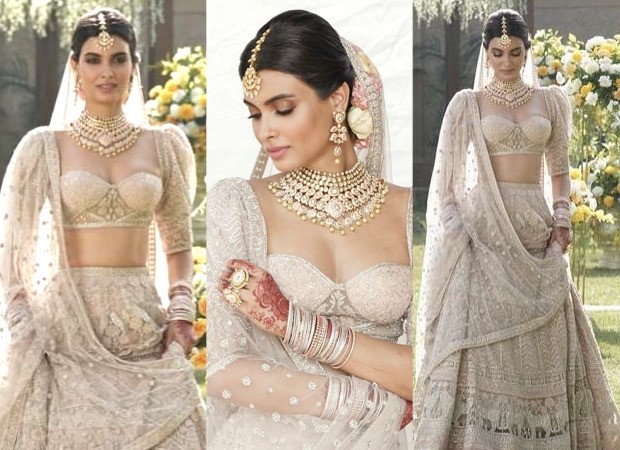 Diana Penty was seen in a Falguni and Shane Peacock creation for a shot in her upcoming film Shiddat. She was styled by Sukriti Grover. She chose this light hued, embellished lehenga.

Diana looks ethereal in this piece that features a sweetheart neck blouse with puffy, quarter length sleeves, The brocade blouse featured a heavy yoke with a bustier style top half and a high waisted heavily embroidered lehenga that featured heavy work, embellishments and an intricately designed border.

Diana's makeup was fresh with rosy cheeks, glossy lips, her hair in a neat bun with a heavy floral arrangement. She also added heavy jewellery to the look with a kundan choker, dangler earrings, a maang tikka and bangles on her wrist.

Diana was the perfect example of a pastel glory as she stood out in this piece and was glowing in the snaps.

Earlier, Diana took to Twitter to announce her Malayalam debut film Salute. She stars opposite Dulquer Salmaan in the film. It is directed by Rosshan Andrrews. Apart from Salute, Diana will next be seen in Shiddat. The film also stars Radhika Madan, Sunny Kaushal and Mohit Raina. It is directed by Kunal Deshmukh.

Also Read: Sharing inspiring stories of Covid Heroes, Diana Penty expresses gratitude towards everyone for their support towards the #EveryLifeMatters initiative

Bipasha Basu turns up the heat in a sexy…