There’s no doubt the South Korean group BTS has taken the world by storm and reached superstardom. Besides breaking records, topping the charts, winning numerous awards, and making appearances at prestigious events, the Korean band is capable of selling out stadiums, products and everything they promote in seconds and minutes. Many artists worldwide are in-line to collaborate with BTS and till now, all the collaborations that BTS have proven to become smashing hits. With the most recent collaboration with Coldplay on the track ‘My Universe’ which released on September 24, the lyric was released though an official video is yet to come. 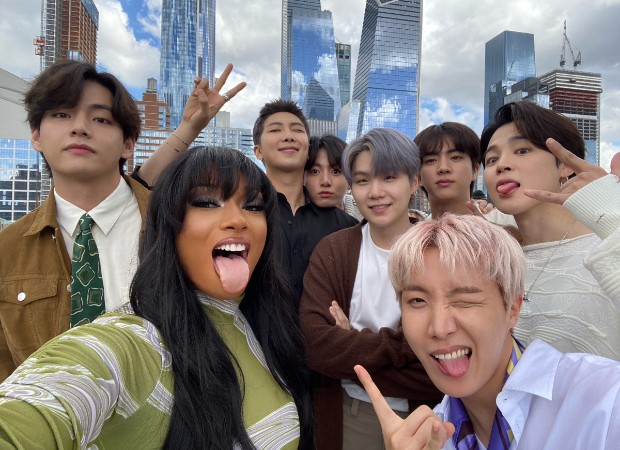 Here is the list of the times BTS collaborated with the biggest names in the international music scene:

PERMISSION TO DANCE with ED SHEERAN
After the chart-topping ‘Butter’, the new track ‘Permission to Dance’ was the one to switch place at No. 1 on Billboard Hot 100 chart. Co-written by Ed Sheeran, who had previously co-written ‘Make It Right’, in BTS' Map of the Soul: Persona. The song initially described as a dance-pop song that the song that “will make your heart beat to the rhythm of BTS's positive energy.” Though Ed Sheeran might not feature physically on the tracks, he had worked on with BTS but he definitely made his presence felt.WASTE IT ON ME, THE TRUTH UNTOLD & MIC DROP WITH STEVE AOKI
BTS marked their first collaboration with the phenomenal producer Steve Aoki, who is not just a DJ but also fashion designer, author, and philanthropist, for the epic single ‘MIC Drop’ which soared high on the charts. The group sure seems to love Steve Aoki because they collaborated on another song having straight-up piano ballads which might not be the first thing you think when you hear the name Steve Aoki, so it might be a surprise to find out he had a hand in the vocal line’s emotional slowy on Love Yourself: Tear album song- ‘The Truth Untold’. The song ‘Waste It on Me’ – the band’s third collaboration with the artist is a light, poppy dance track featuring Jungkook, RM, and Jimin that doesn’t break the mold in any way but is pleasant enough. The music video featured an all-Asian-American cast in the video including Crazy Rich Asians' Ken Jeong.IDOL FEAT. NICKI MINAJ
As if there wasn’t already enough going on in the bells and whistles of ‘Idol’, Nicki Minaj jumped on board a new version of the track from the Love Yourself: Answer album. The name-dropping John Mayer and boasting, “What’s good, Korea? / You know I’ve been a boss for my whole career” international superstar Nicki Minaj’s verse packed with even more action, power and fiery attitude that already sounded like it was about to erupt.MAKE IT RIGHT FEAT. LAUV & WHO
This collaboration of the band with American singer-songwriter Lauv is what that is just right. The reboot of ‘Make It Right’, an R&B single co-written by Ed Sheeran immediately reached the No. 1 in the US iTunes chart when it was released. After that, BTS featured on Lauv’s album how i’m feeling on the most romantic track ‘Who.’BOY WITH LUV FEAT. HALSEY
Talking about collaborations and not mention Halsey and BTS’ friendship and sort of a sequel to BTS' 2014 hit, ‘Boy In Luv’, ‘Boy With Luv’ made everyone went ~oh my my my~in 2019. Funky bubblegum pop song featuring Halsey showcased their electric chemistry between the two artists marked the whole thing even more enjoyable and intoxicating.CHICKEN NOODLE SOUP WITH BECKY G
j-hope created his version of ‘Chicken Noodle Soup’ sampling it from 2006 single of the same name. The song featured singer-songwriter Becky G and totally killing it with lyrics in English, Korean, and Spanish. The track also started a dance challenge craze on the internet.OLD TOWN ROAD REMIX with LIL NAS X (SEOUL TOWN ROAD)
RM performed alongside Lil Nas X to remix collaboration of ‘Old Town Road’ called ‘Seoul Town Road’ marking the group's debut performance in the 2020 Grammys a first for a K-pop act. RM made the version even more fun by adding his worldplay in the lyrics – “I got the homis in my bag / have you heard of that? / Homis made of steel, from Korea, they the best.” (homis is a farming tool in Korea.)! BTS performed the same track together at Grammys 2020.ALL NIGHT Feat. JUICE WRLD
RM and SUGA teamed up with the late rapper Juice WRLD for the third instalment of the soundtrack for BTS’ mobile game BTS World for the ‘90s tinged hip-hop track. The low-key sounding classic breezy and bubbling track with the three voices meshes perfectly.ON feat. SIA
BTS' album Map of the Soul: 7 released with a powerful anthem which was sung with an equally powerful voice of ‘Chandelier’ fame, Sia, for the digital release of ‘ON’. Both the artists being fighters in their own way; empower with their voices and sing that nothing can hold them down.BEST OF ME with THE CHAINSMOKERS
The Chainsmokers' modern and upbeat style was totally present in Best of Me from Love Yourself: Answer. There’s no denying is a banger of its kind while putting BTS’ own stamp and subtly bearing The Chainsmokers’ hallmark on the track, which would go down at an EDM festival or at the K-pop group’s own shows.
EMBED 10:DREAM GLOW WITH CHARLI XCX
BTS World – a gaming application – has some of the most beautiful tracks created by BTS. One of them is ‘Dream Glow’ feat. singer Charli XCX. The song is so catchy with the vocals of all artists, it instantly makes you want to groove.
A BRAND NEW DAY WITH ZARA LARSSON
One of the hidden gems from BTS World gaming application is ‘A Brand New Day’ featuring the amazing Zara Larsson. It’s an earworm with some of the best beats created.Also Read: Coldplay and BTS spread meaningful love with their much-anticipated collaboration ‘My Universe’, watch lyric video
Tags : BTS, Charli XCX, Coldplay, Ed Sheeran, Features, Halsey, International, Juice Wrld, K-pop, Lauv, Megan Thee Stallion, Music, Nicki Minaj, Songs, Steve Aoki, The Chainsmokers, Zara Larsson