The day Monday was a busy day for the global superstars BTS, where in the morning the boy-band freshly minted as “special presidential envoy for future generations and culture” by South Korean President Moon Jae-in, appeared with the leader at the 76th session of the United Nations General Assembly in New York. They spoke to the power of today’s younger generations to create a more positive and healthy world. In the evening, they joined the First Lady of South Korea, Kim Jung-sook, a classically trained singer, and culture minister Hwang Hee at the Metropolitan Museum of Art, to present a gift from the South Korean government of lacquer ware vessels by Chung Haecho. 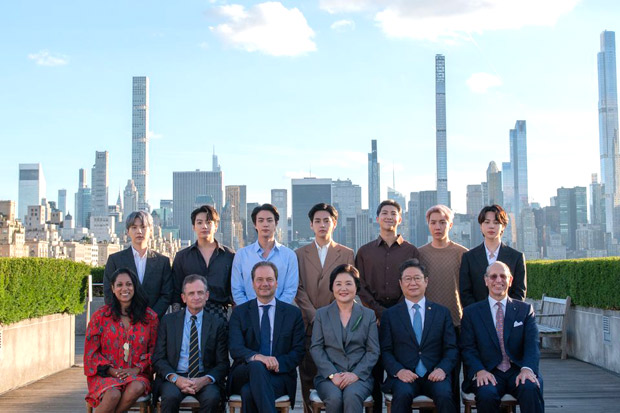 According to The Art Newspaper, BTS leader RM, at reception held on the Met’s rooftop garden, said, "The eyes of the world are on Korean culture—Korean dramas, Korean film, Korean music—but there are still many great Korean artists who are yet to be discovered by the world.” He also shared that he was very fond of the swinging Big Bird sculpture underneath Alex Da Corte.’

He added that BTS felt "a special sense of pride" of being able to support the work of other artists from their country, and are armed with the mission “to try to spread Korean culture through the world and to everyone around the world”.

The MET’s first exhibition dedicated to the art form, Shell and Resin: Korean Mother-of-Pearl and Lacquer, will feature Rhythm of the Five Color Luster (2013), a gift of five vividly coloured containers based on the cardinal directions and five components of East Asian cosmology (13 December-5 July 2022). Around 30 works from the museum’s collection will be on display, ranging from an extremely rare 12th century trefoil box from the Goryeo dynasty (918-1392) to a mixed media artwork by modern artist Lee Bul. The set of richly colored lacquer vessels by artist Chung Haecho will go on show in the New York museum this December.

The museum’s director, Max Hollein said, “We’re deeply grateful for this generous gift of contemporary lacquer vessels, a gesture that is particularly meaningful as we look ahead to 2023—when The Met will celebrate the 25th anniversary of our Arts of Korea gallery.”

The museum is also currently looking to endow its curatorial position for Korean art through a challenge grant from the Korea Foundation.

In January 2020, the hit band launched a series of five major public art projects, involving collaborations between some of the world's most significant artists and curators around the world. In a statement at the time, BTS said that "contemporary art and music are also two different worlds. This project is especially meaningful to us because it truly represents diversity and creates a collective, positive message for the world that we value. Through this project, we hope to return the great amount of love and support from our fans, Army, and all audiences."

Hollein, at the gift giving said, “Your big hit right now is 'Permission to Dance', ‘that’s exactly what we need right now, at what I hope is the tail end of the pandemic. We need to dance more. Thank you for being here."

Also Read: BLACKPINK’s Lisa makes her solo debut on Billboard charts with ‘Lalisa’ ranking at No. 2 on Global 200