Last Updated 24.10.2021 | 5:08 PM IST
feedback language
follow us on
Bollywood Hungama » News » Bollywood News » Kartik Aaryan gets lost on his way to Panchgani for the shooting of his upcoming film Freddy

After wrapping up the shooting of his upcoming film Freddy, actor Kartik Aaryan went to Panchgani. While on his way, the actor gets lost driving around the hill station. A few cops offered to help him, but first made sure to click a selfie with the star. 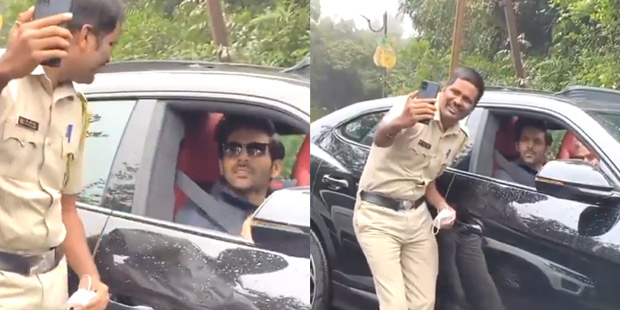 As can be seen in the viral video on social media, Kartik in the driver’s seat looks confused. When the person behind the camera asks him where he's headed to, to which Kartik says he was supposed to take the last right. A few policemen came across his car and started clicking selfies with the actor instead of asking him first what’s wrong. When people around him asked if he was getting late for shoot, Kartik laughed it off and said 'no'.

Kartik took to his Instagram handle sharing a goofy black and white picture of himself from the sets of Freddy, updating fans about him wrapping up the climax of his next. . The romantic thriller is filled with unpredictable twists and sharp turns co-stars Alaya F in the lead role alongside Kartik. The film was shot in Panchgani Hill Station, Maharashtra and is helmed by Helmed by Ekta Kapoor and Shashankha Ghosh.

On the work front, Kartik has also resumed shooting for Bhool Bhulaiyaa 2. He will also be seen in Dhamaka, Shehzaada and Captain India.

Has John Abraham HIKED his price to a…

John Abraham to do a double role in Hera…

Big B, Deepika and Irrfan to star in Piku

John's next with Shoojit based on football