Review: With stellar direction, action scenes aplenty and a thrilling depiction, Jurassic World Fallen Kingdom is certainly a must watch.

Back in 1993, JURASSIC PARK introduced viewers to a different breed of monster movies that thrilled and chilled. Following this, the JURASSIC trilogy with two more subsequent films viz. THE LOST WORLD: JURASSIC PARK and JURASSIC PARK 3 hit screens in 1997 and 2001 respectively. Cut to 2015 when the first of the new trilogy that was based on the previous three films releases with JURASSIC WORLD made a splash. Taking up the mantle from the earlier three, the 2015 release did rather well at the box office re-establishing the JURASSIC brand. Now a couple of years on we see the second instalment in the new Jurassic trilogy gearing up for release with JURASSIC WORLD: FALLEN KINGDOM. But will the fifth film in the series live up to the dinosaur expectations of fans that have been developed over years or will it like the creatures in the film fade into oblivion is the question of the hour. 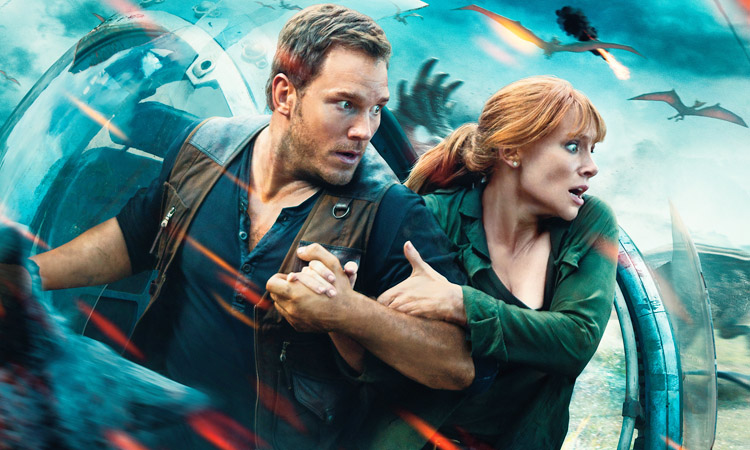 JURASSIC WORLD: FALLEN KINGDOM starts off four years after the Jurassic World theme park was closed down. Owen and Claire return to Isla Nublar to save the dinosaurs when they learn that a once dormant volcano on the island is active and is threatening to extinguish all life there. Along the way, Owen sets out to find Blue, his lead raptor, and discovers a conspiracy that could disrupt the natural order of the entire planet. Will they manage to foil the malicious plan or will life find a way again, is what makes up the rest of the film.

Going into the film, the first question that comes to mind is whether the makers of JURASSIC WORLD: FALLEN KINGDOM will manage to provide a different take on the happenings in this film from the previous four? Well, the short answer is yes. Director J. A. Bayona has done a marvellous job with the new film; he has dared to take risk where others would have usually preferred to stick to the tried and tested formula. Though the basic plot line of the film still remains the same viz. dinosaurs are introduced into modern times and run amok while all hell breaks loose. However, unlike the 2015 film, the new one deals with a more human angle where the power of greed comes into play. Starting off with an epic sequence that grabs your attention, the film continues to engage viewers’ right through the first half. Set in the open landscape of Isla Nublar, the visuals are both breath-taking and thrilling giving the viewer a feel of the enormity of the dinosaurs and the task faced by Owen and Claire. Post the interval there is a change in setting with the on screen happenings shifting indoors. However, this restriction does not dampen the proceedings. In fact, thanks to this shift Bayona manages to recreate some of that old school charm, thrill and excitement that was felt in the first ever JURASSIC PARK. From introducing a new species to relocating the dinosaurs while at the same time battling for survival, the film encompasses almost every emotion that you would expect.

Coming to the performances, for Chris Pratt (Owen) JURASSIC WORLD: FALLEN KINGDOM is a chance to recover a bit after his character’s faults in the recently released film AVENGERS: INFINITY WAR and boy does he do a good job. Sticking true to his role of being a dinosaur trainer, Pratt does well in his given role managing to make the task of communicating with an animal believable. Bryce Dallas Howard as Claire too is pretty good, keeping up with the happenings. Howard makes her character believable by developing an emotional connect with the viewers. Similarly the rest of the cast as well do a decent job to lend support to the main leads. 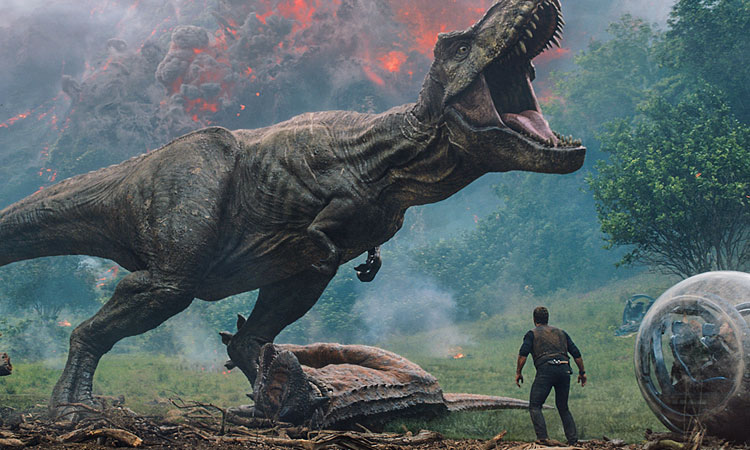 Talking about the visuals, it has been 25 years since the release of the first film JURASSIC PARK and with the advancement in technology JURASSIC WORLD: FALLEN KINGDOM can easily be classified as one among those that seamlessly interweaves CGI and live action. This coupled with a background score that builds up the crescendo at the perfect moment and the overall dark theme of the film lend a more plausible and relatable tale.

On the whole, JURASSIC WORLD: FALLEN KINGDOM might not be the best in the Jurassic series but it comes pretty close. With stellar direction, action scenes aplenty and a thrilling depiction, this one is certainly a must watch. At the Indian box office, with no Bollywood release, the film is likely to do well especially since it enjoys a wide release across four languages.